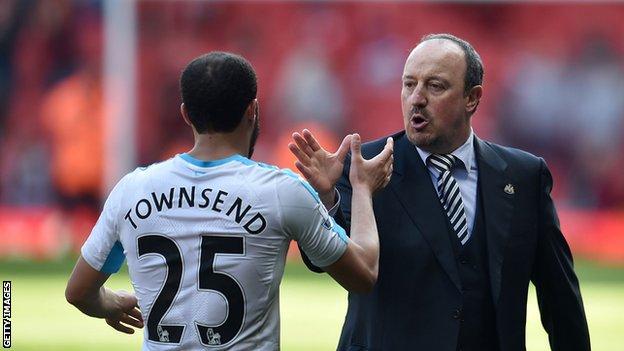 Townsend, 30, joined on a free transfer following the end of his contract at Crystal Palace and has signed a two-year deal with the Toffees.

Begovic, 34, has signed from Bournemouth on a 12-month contract with the option of a further year.

"Everything is in place for us to be successful," said Begovic, who will provide back up to Jordan Pickford.

Townsend's arrival at Goodison Park sees him reunited with new Everton manager Rafael Benitez, with whom he worked at Newcastle United.

"Everton is a massive club," he told EvertonTV. "I want to prove I'm good enough to be an important player here."

Townsend, capped 13 times by his country, started his career in Tottenham Hotspur's academy, spending seven years at White Hart Lane before moving to Newcastle in January 2016.

He spent just half a season in the north east of England before joining Palace after Newcastle were relegated to the Championship and spent five years at the Eagles.

"My strengths are that I can cross a ball with my left or right foot, get balls into the box," said Townsend.

"I like to score a goal or two and I work hard off the ball – which is something I got better at with Rafa.

"My job now is to prove I'm good enough to be an important part of this football club and that's what I'm working hard in training and in games – and whenever I get the opportunity in pre-season – to do. That's what drives me."