The world’s best female golfers are in France this week for the Evian Championship, the fourth of five majors in the 2021 schedule.

The tournament returns to the schedule this year after a one-year hiatus due to the Covid-19 pandemic, with the event also marking the start of a four-week stretch of LPGA Tour events in Europe. 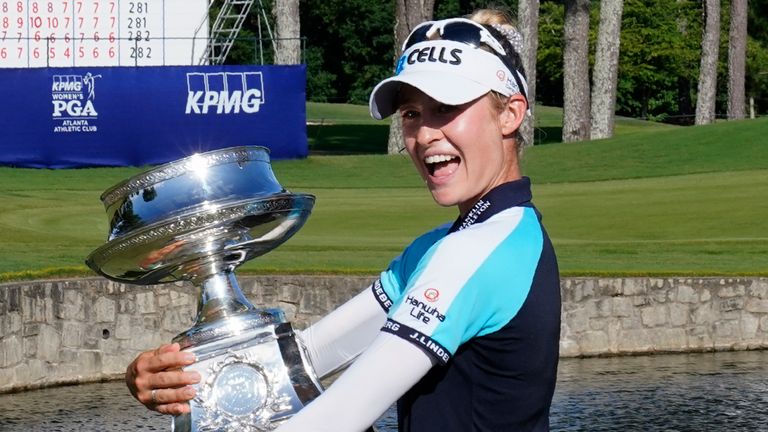 World No 2 Jin Young Ko returns as defending champion after coming back from three strokes behind on the final day in 2019 to claim a two-shot win over Shanshan Feng, Hyo-Joo Kim and Jennifer Kupcho.

Ko is part of strong field in France, with world No 1 Nelly Korda, seven-time major winner Inbee Park and 15 of the LPGA Tour’s 16 winners so far in 2021 all in action for the fourth of five majors in the women’s golfing calendar.

Some 27 countries will be represented in an international line-up this week, with Charley Hull, Georgia Hall and Alice Hewson among a strong English contingent, while Scotland’s Carly Booth and Northern Ireland’s Stephanie Meadow are also involved.

Sky Sports Golf and the Sky Sports Golf YouTube channel will have live coverage from all four tournaments, with two sessions of play over the first two days and extended coverage over the weekend.

Coverage begins at 10am and 2.30pm for the first two rounds and from 10.30am over the final two days, with the event part of a quadruple-header of live golf on Sky Sports this week.

Click on the video above to watch our free live stream from the Amundi Evian Championship!