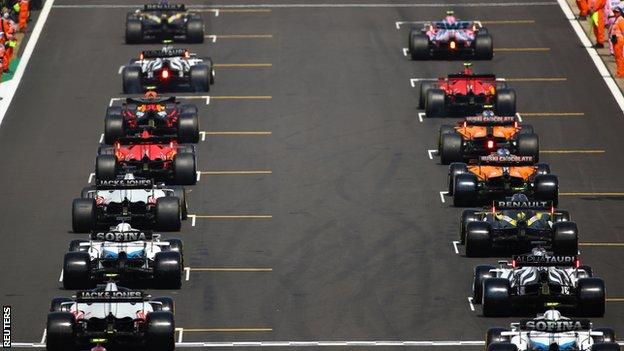 'Sprint' races might be used more widely in 2022 if successful

Details are still to be ironed out, but all teams gave their support to the idea at a meeting of the F1 Commission.

Teams and F1 bosses also agreed to the introduction of a freeze on engine development from the start of 2022.

This could be enough for Red Bull to finalise plans to continue running Honda engines when the Japanese company pull out at the end of this year.

And bosses agreed to bring forward the introduction of new engine regulations by a year to 2025.

F1 had proposed an idea to try out sprint races of about 100km – a third the distance of a Grand Prix – at the Canadian, Italian and Brazilian races this season.

These would take place on Saturday and the result of the sprint race would set the grid for the main Grand Prix on Sunday.

The grid for the sprint race would be set by moving qualifying to Friday.

The teams backed the plan in principle at the meeting on Thursday but discussions will continue on a number of areas.

These include whether and how many points should be awarded for the sprint race; whether it would mean two 'winners' each weekend or just one; and the financial, legal and contractual implications of the plan.

A statement from governing body the FIA said: "All teams recognised the major importance of engaging fans in new and innovative ways to ensure an even more exciting weekend format.

"There was, therefore, broad support from all parties for a new qualifying format at some races, and a working group has been tasked with creating a complete plan with the aim to reach a final decision before the start for the 2021 championship."

The prospect of a freeze on engine development from the start of 2022 had been tabled as a means of reducing costs ahead of the introduction of a new engine design in 2025 or 2026, and to facilitate Red Bull's desire to continue with Honda engines.

The Japanese company is leaving F1 at the end of this season, but Red Bull would prefer to take over the intellectual property of the Honda and maintain the power-units themselves rather than become a customer of another manufacturer.

This is because it gives them the prospect of independence and perhaps even manufacturing their own engines when the new rules come into force in the middle of the decade.

But to make the plan work, Red Bull needed a guarantee that their rivals could not develop their own engines and establish a growing advantage over the years from 2022, leaving Red Bull falling further and further behind.

Talks on the issue have been ongoing for months and a freeze from the start of the 2022 season was agreed by the F1 Commission.

There will not be a means of equalising the performance of the engines should one or more turn out to be less competitive once racing starts in 2022. However, it was agreed that if there is a big difference in power output, a way would be found to reduce it.

Red Bull had wanted this to be introduced but Mercedes have reservations about the idea.

Red Bull were unavailable for comment on the matter.

The freeze was brought in partially to allow engine manufacturers to focus on the development of a new engine for new rules without having to fund development on current engines at the same time.

The specification of the new engines has not been finalised, and will be discussed between the FIA, F1 and current and potential power-unit manufacturers.

The new units will continue to be hybrids and the FIA has set a series of key objectives for the new engine:

The teams were told that the Portuguese Grand Prix would go ahead on 2 May, a slot in the calendar for which a venue has yet to be officially confirmed, as BBC Sport reported on Wednesday.

There was discussion of a ban on the use of wind tunnels for aerodynamic design from 2030, but this was opposed by Mercedes, Aston Martin (formerly Racing Point) and Williams.

And it was agreed to increase the number of test days afforded to tyre supplier Pirelli as it seeks to design new tyres for the new technical rules that will be introduced next year.

These tyres will be lower profile than F1's existing ones and will be fitted to 18-inch wheels rather than the current 13-inch wheels.

Pirelli has been tasked with producing a tyre that is more raceable, and which does not suffer from the extreme heat sensitivity of its existing tyres, which mean that drivers have to engage own careful management of the rubber and can rarely push flat out during races.