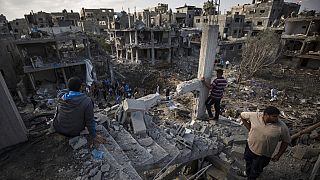 Palestinians fled Gaza City in droves on Friday as Israel continued intense bombardment of the Palestinian Territories in the worst outbreak of violence since 2014.

Israel has massed troops on the Gaza frontier and called up at least 9,000 reservists, stoking fears of a ground invasion.

Meanwhile a barrage of artillery fire and airstrikes on the Hamas-controlled territory continued into Friday, with reports of hospitals overwhelmed and people fleeing for their lives.

The Gaza Health Ministry says the Palestinian death toll from the fighting has risen to 119, including 31 children and 19 women, with 830 wounded. Hamas and Islamic Jihad militant groups have confirmed 20 deaths in their ranks, though Israel says the number is higher.

World shows support for Palestinians and for Israel Israeli-Palestinian clashes: How did we get here?

Seven people are known to have been killed by Hamas rockets in Israel, including a 6-year-old boy and a soldier. The militant group has fired close to 2,000 rockets at the territory since the fresh wave of violence broke out on Monday. 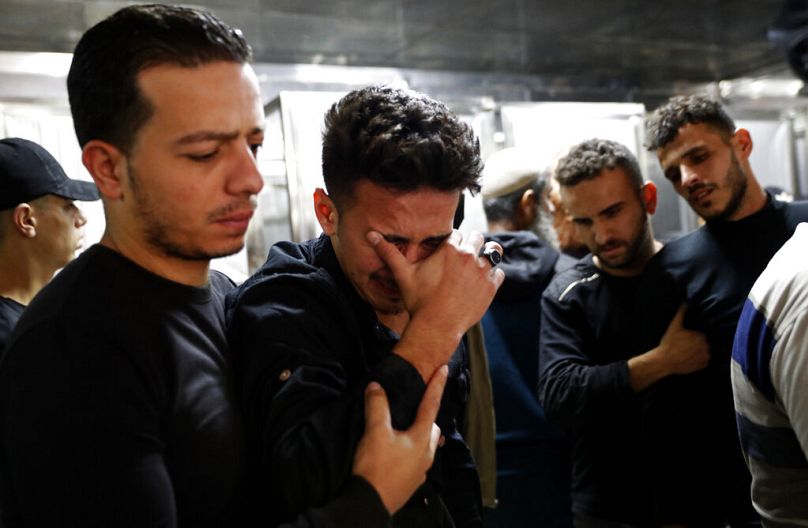 Relatives mourn during the funeral of Reema Telbani and her 5-year-old son Zaid, who were killed in airstrikes on their apartment buildingAdel Hana/AP

The heaviest bombardment yet began late on Thursday night. The Israeli Defense Forces (IDF) issued a statement at just after midnight local time in which it said air and ground forces were “currently attacking the Gaza Strip”, offering no further details.

Lt. Col. Jonathan Conricus, a military spokesman, later confirmed that tanks stationed near the border had fired 50 rounds on the city.

It was part of a large-scale operation aimed at destroying tunnels beneath Gaza City that the IDF says are used by militants, and which it refers to as ‘the Metro.’

“I said we would extract a very heavy price from Hamas,” Prime Minister Benjamin Netanyahu said in a videotaped statement. “We are doing that, and we will continue to do that with heavy force.”

Hamas and the IDF continued to exchange rocket fire and airstrikes throughout Thursday night and into Friday.

Late on Thursday night, rockets were also fired towards Israel from southern Lebanon, landing in the Mediterranean sea. Lebanese officials have said they are thought to have been fired from the refugee camp of Rashidieh.

After the bombardment on Thursday night, which saw several apartment buildings in Gaza reduced to rubble, many families fled their homes, arriving at UN schools in the city on pickup trucks and donkeys loaded with their belongings. 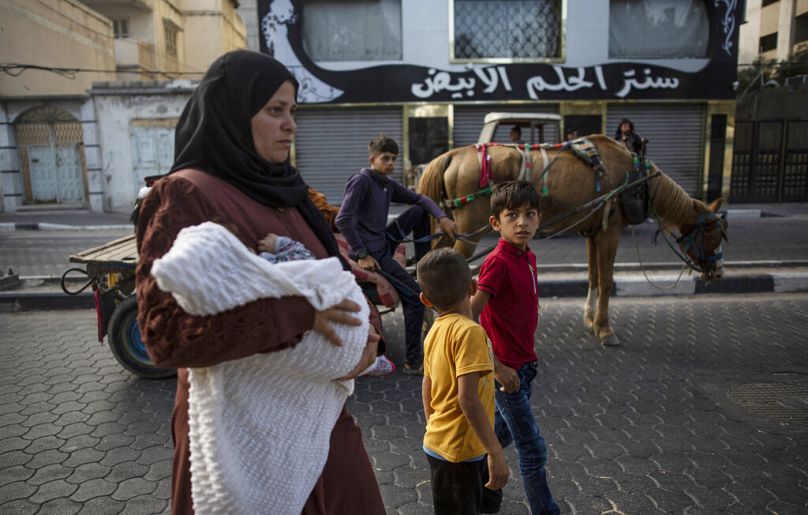 Hedaia Maarouf, who fled with her extended family of 19, including 13 children, told AP: “We were planning to leave at night, but Israeli jets bombarded us so we had to wait until the morning. We were terrified for our children, who were screaming and shaking.”

Mohammed Qadada is the founder and CEO of Planet for Digital Solutions in Gaza City and his office was housed in a tower block targeted by Israeli airstrikes.

Qadada lost his entire business as the tower came down. Speaking to Good Morning Europe, he said these are the worst days he’s experienced in Gaza.

World shows support for Palestinians and for Israel Can the EU help defuse tensions as Israeli-Palestinian violence escalates?

“We never experienced the bombing of towers before,” he said. “That’s a big waste of lives, of families and dreams. People are struggling to work hard, to at least have their days in peace.

Listen to our full interview with Mohammed Qadada by clicking on the media player above.

Tensions over the eviction of Palestinians from strategic parts of East Jerusalem had reached boiling point at the start of the week, leading to Israeli police descending on the al-Aqsa Mosque compound, with hundreds injured in the ensuing carnage.

Thousands of Israeli families are now spending the nights in bomb shelters after Hamas intensified its bombardment of cities across Israel on Wednesday. 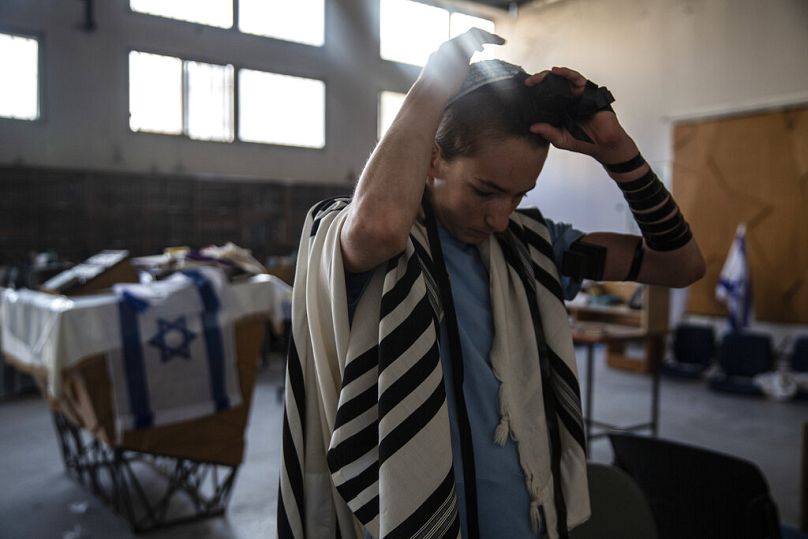 Nightly clashes have also continued between Arabs and Israelis in some of Israel’s mixed cities. Mob violence between far-right Jewish groups and Arab citizens of Israel has seen businesses and places of worship looted and torched, and at least one Palestinian was shot and killed in the city of Lod.

Police confirmed on Thursday that they arrested nearly 400 people allegedly “involved in riots and disturbances” across the country the previous night.

There was more ethnic strife on Thursday evening. In Tel Aviv, two Jewish men attacked a journalist covering a gathering of ultranationalists.

In Lod, a Jewish man was shot and badly injured by an Arab man while in Jaffa, an Israeli soldier was attacked by a group of Arabs and taken to hospital in serious condition. On Friday, the Israeli military also said an officer had opened fire on a Palestinian driver who tried to ram his car into a soldier at a military post near Ofra settlement in the West Bank.

No end in sight as IDF troops deployed to border

Despite diplomatic efforts to ease the crisis, which U.S. President Joe Biden said on Wednesday he hoped would end “sooner than later”, the conflict shows no sign of slowing.

Late on Thursday, Israel’s Defense Minister Benny Gantz ordered the mobilization of an additional 9,000 reservists ahead of a possible ground invasion.

Chief military spokesman Brig. Gen. Hidai Zilberman said troops, tanks, armoured vehicles an artillery were being prepared along the border for mobilisation “at any given moment”. 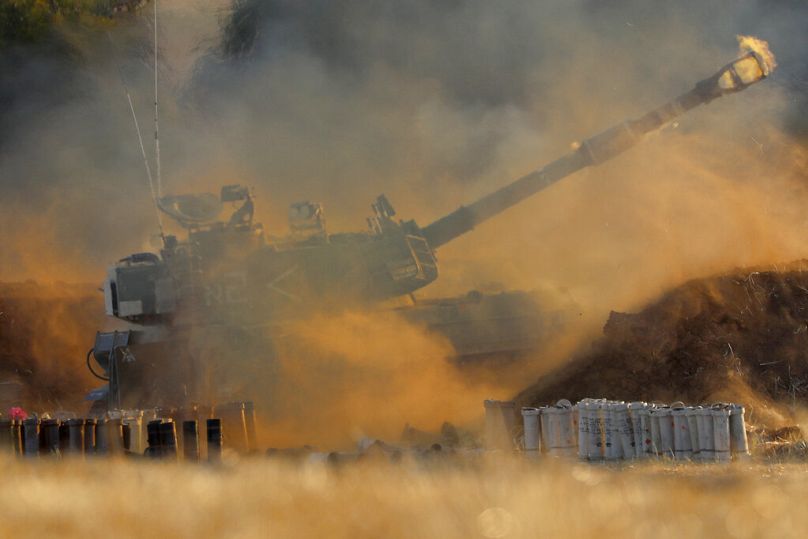 Israeli artillery also pounded targets in Gaza from the border and mid-way through Thursday were said to have thwarted four separate groups of Hamas militants operating anti-tank missiles inside Gaza.

In the early hours of Friday, the IDF released a video of the strikes on the tunnel system it says are used by Hamas. Overall, the accompanying statement said, the operation had involved 160 aircraft, tanks, artillery and infantry units along the border.

The relentless escalation of hostilities, which are spreading farther and wider than at any time since the 2000 Palestinian intifada, came even as Egyptian negotiators held in-person talks with the two sides in a bid to broker a ceasefire.

Egyptian officials arrived in the region on Thursday and met first with Hamas leaders in Gaza before holding talks with the Israelis in Tel Aviv.

But just as their presence was first being reported, Hamas fired an almost simultaneous volley of another 100 rockets, raising air raid sirens around southern and central Israel. 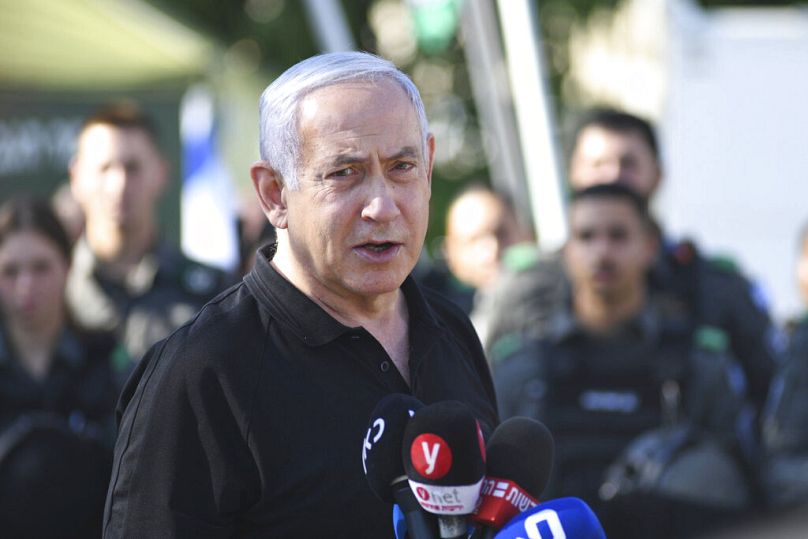 “The decision to bomb Tel Aviv, Dimona and Jerusalem is easier for us than drinking water,” a spokesman for Hamas’s military wing said in a video message.

Saleh Aruri, an exiled senior Hamas leader, told London-based satellite channel Al Araby early on Friday that his group had turned down a proposal for a three-hour lull to allow for more negotiations toward a full cease-fire. He said Egypt, Qatar and the United Nations were leading the truce efforts.

On Friday, Biden said again that he had spokem with Netanyahu about calming the fighting but also backed the Israeli leader by saying he believed “there has not been a significant overreaction.”

The goal now, he said, was to “get to a point where there is a significant reduction in attacks, particularly rocket attacks.” He called this effort “a work in progress.”