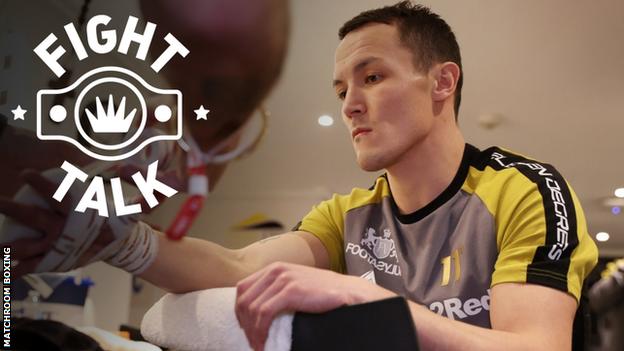 Josh Warrington had not fought since October 2019

In this week's Fight Talk we look at Josh Warrington's shock defeat by Mauricio Lara on Saturday night and discuss where the 'Leeds Warrior' goes from here, plus fighters and fans criticise the judges' scorecards in Zelfa Barrett's win over Kiko Martinez.

There's also a focus on Josh Kelly's European welterweight clash against Russian David Avanesyan this Saturday, with the Sunderland fighter eyeing an all-British dust-up with Conor Benn should he be victorious.

Warrington becomes 'another victim of inactivity'

On Saturday morning Josh Warrington was on top of the world.

The former featherweight world champion had notched up 30 straight wins – including impressive victories over Lee Selby and Carl Frampton to name but two – and was eyeing some of the biggest names in the division.

Las Vegas fight nights – and big paydays – against the likes of Mexicans Emanuel Navarrete and Leo Santa Cruz or Americans Gary Russell Jr and Shakur Stevenson – were in touching distance.

It was a chance for Warrington – who had not fought since beating Frenchman Sofiane Takoucht in October 2019 – to blow away any cobwebs.

But it didn't go quite as planned.

Lara, a huge underdog, floored Warrington in the fourth round, before knocking him out in the ninth.

British heavyweight champion Tyson Fury tweeted that Warrington became "another victim of inactivity" with boxers unable to fight as much as they would like because of the coronavirus pandemic.

Warrington had vacated his IBF belt before the fight rather than face fellow Briton Kid Galahad, his mandatory challenger.

And in a touch of class, Galahad – who lost to Warrington by split decision in June 2019 – had kind words for his rival after Saturday night…

What next for Warrington?

Galahad will face Liverpool's Jazza Dickens for the vacant IBF strap, but what now for Warrington?

The 30-year-old fractured his jaw, perforated an ear drum and damaged his shoulder in the fight, but he's still in good spirits.

Warrington said he's "100%" that he can still achieve his "dreams and goals" in a video posted on YouTube, and later tweeted 'The Warrior will return' …

Promoter Eddie Hearn, speaking to IFL TV after the fight, said the "rematch with Lara is there" for Warrington, should he choose to avenge the defeat.

"But it's only a fight that happens if Josh is healthy, fit, safe, fiery and wants it," Hearn added.

"It's a massive fight but it's not worth talking about at the moment."

Warrington's defeat almost took the attention away from another huge talking point from Saturday night.

Spaniard Kiko Martinez lost to Manchester's Zelfa Barrett on points in the super featherweight dust-up, a decision which Hearn described as "a disgrace".

And the fans agreed, with the word "robbery" making a regular appearance in tweets…

Our attention now turns to the upcoming weekend as Sunderland's Josh Kelly challenges David Avanesyan for the European welterweight title.

It's a much-anticipated clash which has been in the making for a while. And to add to the intrigue, there's some bad blood between the two.

Kelly, who has a professional record of 10 wins and one draw, was due to fight the Russian in December 2018 but the Briton withdrew the day before the fight because of illness.

That led Avanesyan's manager, Neil Marsh, to describe Kelly as "a bottle job".

The two fighters went their separate ways but were then due to meet again, before Covid-19 postponed further bouts.

But fight fans don't have long to wait now as Kelly and Avanesyan finally get it on. It's fair to say 'Pretty Boy' Kelly looks as if he hasn't cut any corners in preparation…

Avanesyan, who has a record of 26 wins, three defeats and one draw, is coming off three consecutive knockout victories, but Kelly already has his eyes on an all-British bout with Benn.

Unbeaten Benn called him out after an impressive win over Germany's Sebastian Formella in November.

And Kelly, speaking to The Mirror, said: "Conor Benn will get dealt with after I've dealt with this European title fight – he'll soon see what I've got to say on telly."

Fury goes for a dip

And finally, fancy seeing WBC champion Tyson Fury run into the sea on a cold February morning at Morecambe South Beach and then high five a random swimmer in a wetsuit?

Of course you do…

Grounded with Louis Theroux: The top ten unexpected revelations from his incredible guestsHow to Avoid a Climate Disaster: Listen as Bill Gates outlines his plan to save the earth
Source