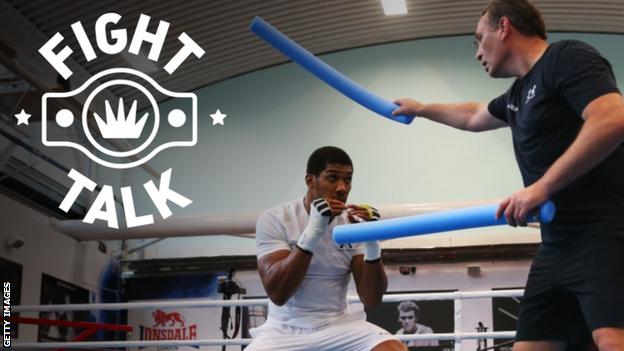 Joshua is trained by Rob McCracken

In this week's Fight Talk, we look into a potential problem for Anthony Joshua, while a YouTuber-turned-boxer claims he generated huge returns for 119 seconds in the ring. One former champ is trimming down in a bid to reclaim heavyweight glories and there's always room for a fans' favourite trying to make a comeback.

So have a read, then throw on a tracksuit, put the hood up, chuck on some heavy boots and go get your roadwork done.

Another week passes and still the wait goes on for confirmations on the Anthony Joshua v Tyson Fury extravaganza that the boxing world longs for.

Joshua's promoter Eddie Hearn now says a venue has been agreed and two dates remain in play, adding that 24 July "has long been in minds".

But Fury's promoter Bob Arum has gone further, stating the agreed site between Joshua and Fury is Saudi Arabia and, crucially, the dates under discussion are 24 July, 31 July and 7 August.

It is therefore looking increasingly likely Joshua faces the prospect of entering the colossal bout without his long-term trainer Rob McCracken, who is set to fulfil his role in charge of Britain's amateur boxers at the Olympics.

The boxing competition in Tokyo runs from 24 July to 8 August and it seems unlikely McCracken will be able to jet in and out of Japan freely given Covid-19 restrictions will almost certainly be in place.

So does that put the whole thing in doubt? Will McCracken need to choose? And could Joshua – who has always placed such emphasis on his trainer's work – end up with someone else in his corner?

Fury, meanwhile, is in Las Vegas, where preparation for his next fight is under way.

"He can train himself; he is that driven and obsessed," said former world champion Andy Lee, who is part of Fury's team. "He could train himself to beat Joshua."

And when Rocky himself – Sylvester Stallone – is posting compliments on training videos, Fury must look good. 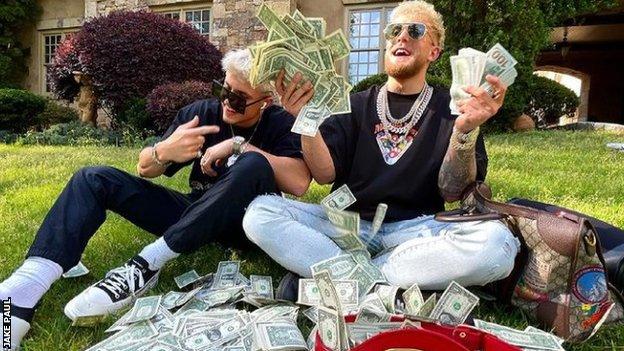 It took less than 120 seconds for Jake Paul to stop former UFC fighter Ben Askren on Saturday and it took even less time for the victorious YouTube star to then be linked with a fight against British boxer and Love Island star Tommy Fury.

Tommy Fury was quick to raise the prospect of facing Paul

Paul quickly told reporters Fury is "weak" and, after his third win in as many professional fights, he claimed he would share $75m (£54m)external-link from pay-per-view sales.

Such a pay day has enraged boxing purists but the undeniable interest in Paul also suggests the era of the 'celebrity boxer' may just be getting started.

"This is a development we can no longer ignore," said BBC boxing correspondent Mike Costello. "Whether people laugh and scoff at the ability of Jake Paul, this whole circus is starting to have an impact on professional boxing, which you have to acknowledge.

"He is at least working on his art because some of the evidence shows that. There was one moment when Paul fought Nate Robinson in his last fight when Paul took half a step back to land the finishing punch. That only comes with someone who has done an awful lot of sparring."

Brave Williams and where now for Paul?

Analyst Steve Bunce told the BBC Radio 5 Live Boxing podcast: "I've been saying we should be taking these guys more seriously for a long time. Paul is a complete and utter novice and has devoted two years of his life to the game. I know seasoned pros will say they've given 15 years. I would say it was the opponent who was the real problem. Askren let the MMA side down.

"Tommy Fury is a terrific novice prospect. Who is in front – Fury or Paul? Maybe Fury is a bit more fluid. We don't know if Paul is fluid because he hasn't had to prove himself."

Now that is a weight cut…

One man who has spent time with Fury in Las Vegas recently is the only person to have conquered Joshua – Andy Ruiz Jr.

The former world heavyweight champion gained weight and failed to prepare for his rematch against Joshua in December of 2019.

But he has joined forces with trainer Eddie Reynoso – the man who guides Saul 'Canelo' Alvarez – and some tough training and improved focus has helped him cut his frame right down in readiness to face Chris Arreola on 1 May.

The return of the Rhino… 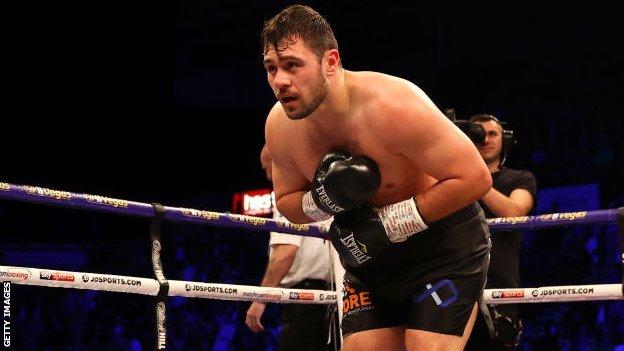 Former WBC world flyweight champion Charlie Edwards moved to answer questions over his future this week, having fought only once since August of 2019.

The 28-year-old wrote: "I just want to set the record straight that I have not retired!

"I have been asked so many questions and heard some rumours that I have. I am currently setting up my life in the Algarve outside of boxing for myself and my family before I go again!"

But one man who did retire and now says he will return is British heavyweight Dave 'The White Rhino' Allen.

The refreshingly honest 29-year-old, who has battled gambling addiction and mental health issues in his past, called time on his career in November.

But the fans' favourite says: "I do fully intend on returning to boxing in 2021, hopefully just after the summer.

Allen hopes the move will help fighters he works with, but his former promoter Eddie Hearn warned he could not work on the comeback: "I knew he was thinking of coming back but I don't think it's something we could look at."

It is hard to hang the gloves up.

We will lace them up again at Fight Talk next week and we hope we have you in our corner.

Time for your roadwork.

The dark side of betting: Meet the man who stole millions from work to sustain his gambling habit"Food is more than calories": Different strategies to help you achieve a healthy weight
Source