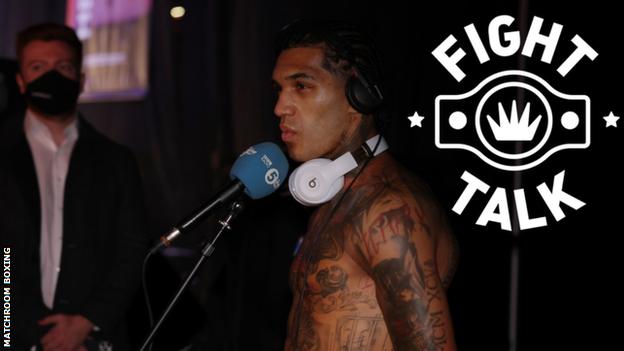 Benn spoke to 5 Live after his win on Saturday

In this week's Fight Talk we ask what you do next with a blistering talent like Conor Benn, Steve Bunce tells us that Savannah Marshall is the best female boxer on earth, we see Evander Holyfield is nearing a comeback and we look back on a women's fight earning rave reviews.

You heard my instructions in the dressing room. Keep it clean and protect yourselves at all times. Let's go.

Benn must pace the journey

Conor Benn blew Samuel Vargas away in 80 seconds on Saturday and in turn blew the roof off the hopes many hold for him in future.

The 24-year-old said he wants to tackle Amir Khan next but judging by the response he got, that one is a non-starter…

So where do you take a young man who has relatively little experience but is moving at pace? Especially in a welterweight division in which the truly brilliant duo of Errol Spence Jr and Terence Crawford sit at the top.

"I think both would sell massively," said Costello. "There's a danger at the moment as he's in a critical position in terms of where they position him next and where that leaves him if he gets towards Spence and Crawford too soon.

"That's why it has to be very steady from here on. Another name that cropped up for me was Jessie Vargas, who has been beaten three times by big names but not outclassed.

"As for Khan and Kell Brook, I can't see either of those two getting near welterweight.

"You are weighing what every promoter and boxer weighs up, risk against reward. What does he get for beating European champion David Avanesyan? I'm not sure it takes him on a great deal and it is a very difficult fight. If you asked me right now, I'd make Avanesyan favourite.

"I'd love to see it but I think the risk-reward weigh up, that one doesn't work for me right now."

'Show me the money Eddie' 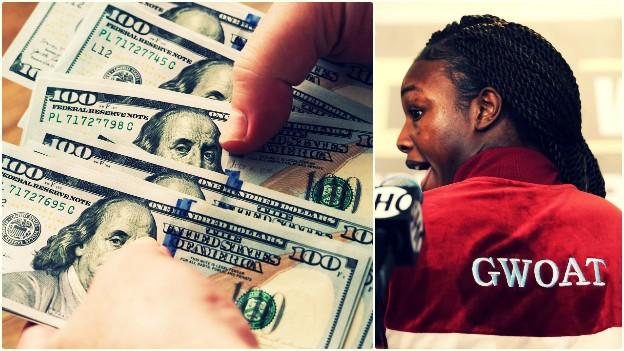 Shields calls herself the 'GWOAT' – Greatest Woman of All Time

As Savannah Marshall set about dismantling Sweden's Maria Lindberg on Saturday one could be forgiven for turning some of their attention to Claressa Shields' Twitter feed.

That's because the self styled 'GWOAT' (greatest woman of all time) is Marshall's prime target. That bout would mean WBO champion Marshall meets IBF, WBA and WBC belt holder Shields in a contest for all four baubles at middleweight.

Shields, who is also venturing into MMA, says she has categorically told Marshall's promoter Eddie Hearn how much money she needs to sign on the dotted line.

Shields tweeted: "Eddie can say what he wants. He knows if he gets the money right that the great white hope will be no more.

"I don't have anything to prove, I'm a three division world champion. But I'll show y'all soon as the money is right. Until then y'all might as well stop trolling me, because I'm just blocking people."

But 5 Live Boxing's Steve Bunce warned: "What we have with Marshall, she has now developed into I think the finest boxer not just in Britain but in the world. What she has is power and she knows she has power. It's pure, absolute purity."

Fight fans can rejoice as it seems Hearn will be getting out the cheque book and he also hopes to make this a stand-alone fight as a main event rather than it being an undercard bout at a big show.

"Marshall will stop Claressa Shields," Hearn told IFL TV. "She will beat her every day of the week. I am going to have to pay the money as it's the only way I'm going to get it."

That noise you just heard is Hearn raiding the piggy bank. Money well spent we say.

Joshua, Fury and a Saudi date?

Marshall-Shields may have some lengthy negotiations ahead but it seems talks for the colossal Anthony Joshua v Tyson Fury bout are almost (we know this has been said for a long time) complete.

Joshua has posted comments about an official offer from a venue, Fury says he knows a few bids are on the table and he's already in Las Vegas training. Now all that remains is for the likes of Hearn to jet around the world and get that ink flowing.

"Fury was talking about Qatar and Saudi," said 5 Live Boxing's Costello. "What I have heard from being in fight bubbles is that Saudi is the favourite. It seems like it has all moved a step closer."

Bunce replied: "A couple of weeks after people in the backwaters were saying 'it's off', we should have known that as soon as you start hearing how a fight is never going to happen, guess what? It's generally going to happen."

Holyfield is ready to rumble 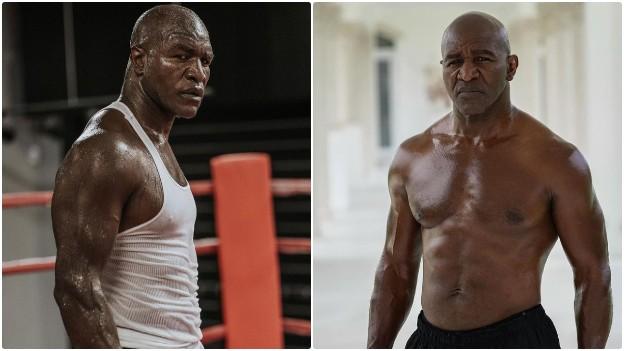 Remember the intrigue when Mike Tyson came back to the ring to take on Roy Jones Jr in November?

Well, the theme of legends returning to the ring is not over yet.

Evander 'Real Deal' Holyfield – at 58 no less – will take on Irishman Kevin McBride in an eight-round exhibition on 5 June according to Sports Illustrated.external-link

All innocent fun right? Not everyone likes the idea…

Praise, respect (and a bruise) shine through 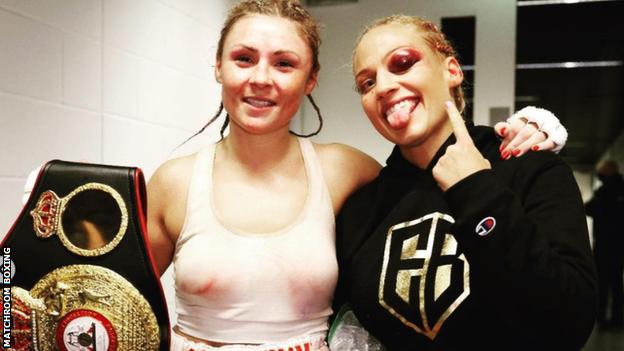 Bridges (right) damaged her left eye in the fight

Shannon Courtenay's world-title win against Ebanie Bridges was so good that I'm sure we'd all like to see it again.

After a fight week dominated by harsh exchanges over how a female fighter should or shouldn't market herself, Courtenay walked away with the WBA world bantamweight title – but boxing won the day.

"The best female fight I've watched in the sport," wrote Chrisfit77 on Instagram.

Ronnie_Wilson142 posted on Australian Bridges' profile: "An amazing fight. Being from the UK I was clearly in Courtenay's corner but you've now got a few fans in this household."

There was blood, fatigue and one very bruised eye on show but when the talking and fighting was done, praise and respect shone through as the pair exchanged compliments back stage.

Bridges says she will now stay in the UK for a spell and called on her Twitter followers to recommend places to visit. We're not sure all the images used were accurate… 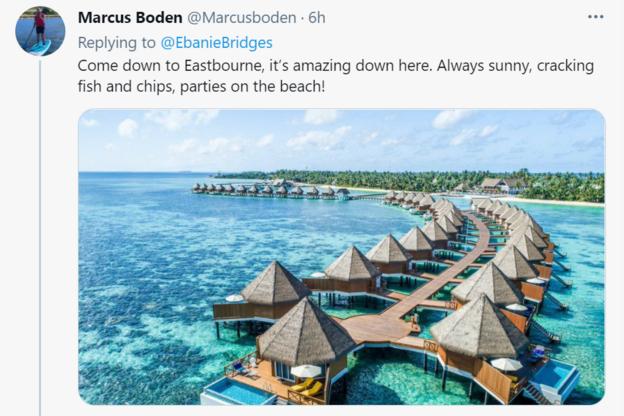 And the final word this week goes to Mr Franklin Roy Bruno.

The former world heavyweight champion has a few words of caution for Brits transitioning to eased Covid-19 restrictions and, like so many, he's also trying to piece together the Sunday night Line of Duty puzzle.

Until next week fight friends… 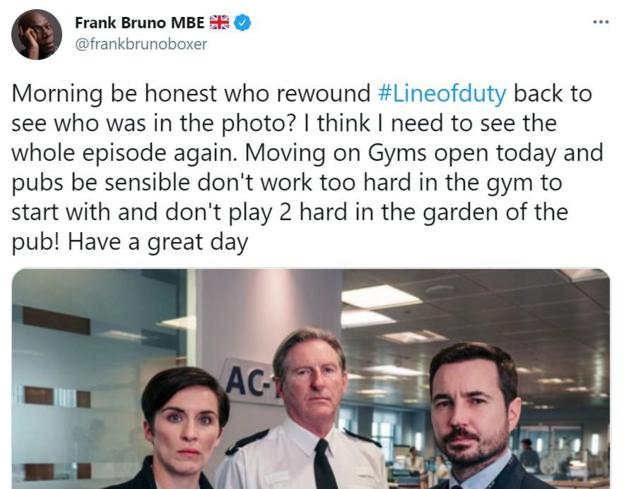