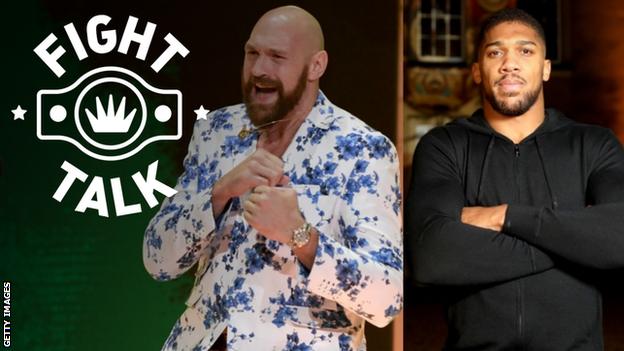 In this week's Fight Talk we look at what the Tyson Fury v Deontay Wilder postponement means for a potential undisputed all-British clash between Fury and Anthony Joshua.

In yet another blow to the heavyweight division, boxing fans were left frustrated this past week as the trilogy fight between WBC champion Fury and contender Wilder was postponed after the Briton tested positive for coronavirus.

The fight was set to take place on 24 July in Las Vegas and could now be rescheduled for September.

It was all looking so rosy back in May.

Fans, media, fighters and pretty much everyone involved in boxing were gearing up for the biggest all-British bout in history.

We were just days away from the undisputed summer clash between Joshua and Fury being made 100% official, with Saudi Arabia the destination.

And then former champion Wilder threw a spanner in the works after an arbitration ruling stated Fury must fight the American for a third time next.

As the initial disappointment settled, fans started to warm to a Fury-Joshua clash later in the year, with the possibility of it being held in the United Kingdom offering a silver lining.

But Matchroom Boxing promoter Eddie Hearn, who represents Joshua, has said it is now unlikely to take place in 2021.

"With Fury fighting September 25, it's very difficult to do a fight in December," he told IFL TV.

"And a lot of our conversations are now about the undisputed fight are end of January or February."

But with Joshua likely to face Ukraine's Oleksandr Usyk next, fans are not convinced we'll ever see the blockbuster bout we're all desperately craving…

Whether it's down to illness, injury or boxing politics, at this moment in time a Joshua-Fury fight seems further away than ever before.

Dillian Whyte offers to step in

One man who is hoping to benefit from the current heavyweight landscape is Briton Dillian Whyte.

The Londoner, who knocked out Alexander Povetkin in March having lost to the Russian last year, holds the WBC 'interim' belt but says he should be upgraded to full champion.

Whyte wants the WBC to make Fury – who has not fought since beating Wilder 15 months ago – 'champion in recess.'

There is no love lost between Whyte and Wilder who have been involved in several social media back and forth battles over the years.

Two explosive fighters in the ring and just as entertaining out of it, it's a fight which would generate a lot of interest…

It doesn't seem likely a Whyte-Wilder clash will happen this year but it could well part-salvage what has been a disappointing year for fans of heavyweight boxing.

Whether you're a fan of him or not, YouTuber-turned-boxer Jake Paul certainly knows how to grab the headlines.

But it's his brashness and trash talk rather than boxing resume which seems to cause the biggest stir.

And this week Ireland's UFC star Conor McGregor was in the firing line for some Paul trolling.

Paul has made it clear that he'd welcome a boxing bout with McGregor, a fight which boxing purists may not approve of but one which would undoubtedly earn both men several millions of dollars.

And in either as an act of generosity or (more likely) a way of riling up McGregor, Paul is now gifting the necklace to Poirier… 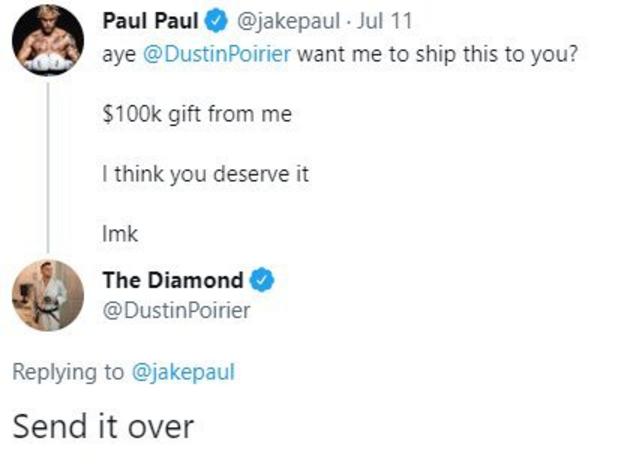 Former six-weight champion Oscar de la Hoya, 48, has not budged on his plans to return to the sport.

And the American has two opponents in mind; a former and current pound-for-pound star.

Speaking on ex-heavyweight champion Mike Tyson's podcast, De la Hoya said: "I want to do two of these exhibition fights and then guess what? I want to do a real fight, a twelve-round fight, with either Floyd [Mayweather] or Canelo [Alvarez]."

De la Hoya lost a split decision to American Mayweather in 2007 and then retired from the sport in 2008.

From punches to putting

We'll leave you with this; Alvarez is arguably the hottest property in world boxing, and this week he showed that he can turn his hand to pretty much anything, even golf!

The Mexican drained a lengthy putt on the 18th for a closing eagle during the American Century Celebrity Golf Championship, and celebrated in style.

Fast hands in the ring, steady hands on the course.

The tough questions facing Uefa: The Sports Desk team look at the problematic side of Euro 2020Will colonising Mars save the Earth?: Why Elon Musk believes it's our only hope
Source