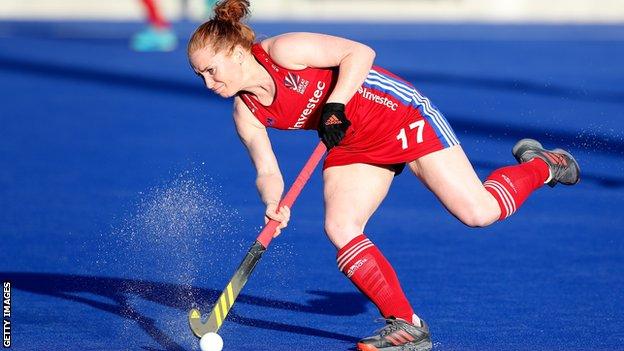 Sarah Jones made her GB debut during the 2018 Champions Trophy

Wales forward Sarah Jones says she is excited to play hockey for Great Britain again after what has felt like an "eternity" away from competition.

Almost nine months later they will resume that competition with four games split across the Netherlands and Belgium this week.

"I think being able to get back onto a pitch and play with teammates in the game that you love and also what is your job allows you to go back to normality. It's great to come away and play four games in six days."

But the competitive experience is certainly different these days. It was a long coach journey to the Netherlands, with masks worn throughout, and social distancing is followed off the pitch at all times.

Everyone has their own hotel room and even meals are eaten on individual tables.

On the pitch there are restrictions too, with players encouraged not to celebrate too closely or get into a tight huddle before a penalty corner.

"There's a lot of stick taps," continued Jones, 30. "As quite a tactile person it is a bit odd.

"You could potentially lose that sense of togetherness and we've had conversations about how we can kind of try and retain that.

"It's a challenge but the great thing about this trip is things might not look that different in the Olympics, so we might have to get used to this and therefore why not start now?

"Having these games against Holland and Belgium will certainly give us a good idea of where we're at.

"It feels like we're playing some really good hockey and it'll be a really good test for us to get some proper matchplay in."

Games against the Netherlands on Tuesday and Thursday are followed by a double-header in Belgium over the weekend.

Two home fixtures against Germany are scheduled for November.

After that "eternity" away, the build-up to the postponed Olympics can finally begin once again.