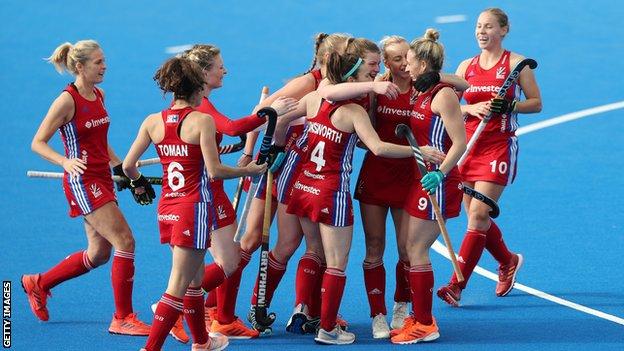 Four players could make their senior Great Britain debuts as the women and men's teams prepare for their first competitive matches in seven months.

Fiona Crackles, Emily Dark, Sophie Hamilton are in the women's squad and Ollie Payne in the men's for two FIH League double headers.

GB face fixtures in the Netherlands on 27 and 29 October and Belgium on 31 October and 1 November.

Laura Unsworth will captain the women's team, who won Olympic gold in 2016.

Unsworth is one of only three members of that team named in the latest squad, alongside Lily Owsley and Susannah Townsend.

Amy Costello and Sarah Evans could make their first international appearances of the year.

Goalkeeper Miriam Pritchard may also play her first GB match, having appeared twice for England in 2017.

Head coach Mark Hager said: "It is very exciting to provide an opportunity to these new players who have been training with us over the last few weeks and shown great development."

In the men's squad, Harry Martin and Adam Dixon are in line to win their 100th GB caps.

Head coach Danny Kerry said of Payne's inclusion: "Ollie is an outstanding young talent and has excelled in training since joining the squad. He now needs to experience the senior international game."