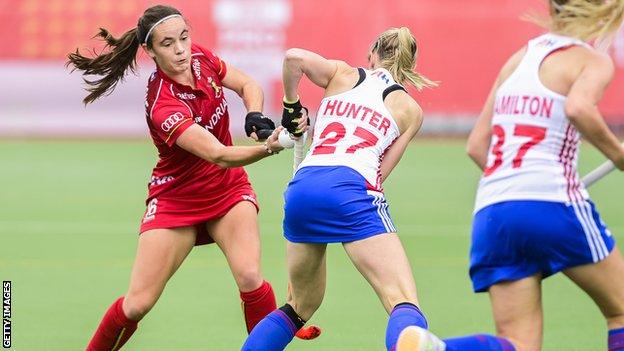 The sides had drawn Saturday's first meeting, with GB winning the shootout for a bonus point.

But this time, Sarah Robertson's third-quarter goal in her 50th game for GB proved the difference in a hard-fought 2-1 win.

However, the GB men suffered a second defeat in a row to the Belgians, losing 2-1 to the world champions.

Although Danny Kerry's side took the lead through David Condon, goals from John-John Dohmen and Alexander Hendrickx secured maximum points and followed their 3-2 success on Saturday.

Earlier, Lily Owsley put the GB women ahead from a penalty corner after 14 minutes but the lead lasted just two minutes as Barbara Nelen struck from close range.

Robertson then finished off a neat penalty-corner routine right at the end of the third quarter and the Olympic champions managed to hold on for victory.

"We are a really resilient team and we knew we had to leave nothing in the tank," said GB's Fiona Crackles.