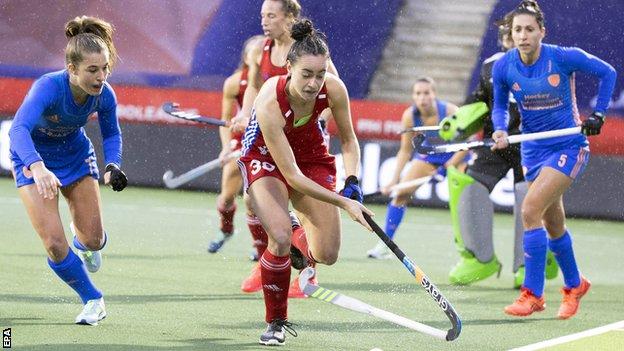 Great Britain's women and men both lost to the Netherlands in the second Pro League matches between the sides in three days.

The women were beaten 3-0 by the Dutch, who are the world number one-ranked side.

The men lost 3-1 with Jeroen Hertzberger scoring twice in the last quarter.

Both GB teams now travel to face Belgium in another double-header on Saturday and Sunday.

The Dutch doubled their lead after 26 minutes when Frederique Matla scored her 44th goal in 73 internationals from a penalty corner, and when GB did find the net at the end of the first half the goal was disallowed for obstruction.

The Olympic champions forced a series of penalty corners in the third quarter but were unable to convert, and captain Eva de Goede wrapped up victory in heavy rain in Amstelveen.

The men, who had lost to their opponents on Tuesday, fell behind after eight minutes when Mink van der Weerden converted a penalty corner.

Phil Roper gave GB hope with an equaliser into the bottom right corner of the net just before the break.

But Hertzberger marked his 250th appearance for his country with a quickfire double to secure the points.