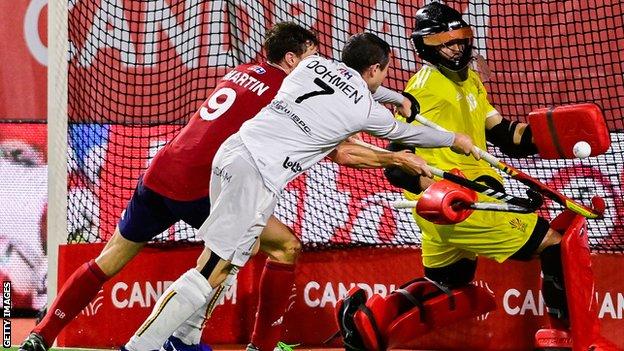 Great Britain slipped to a late 3-2 defeat against Belgium in their Pro League match in Brussels.

Danny Kerry's side twice came from behind against the world champions, but could not respond to John-John Dohmen's goal with two minutes left.

Earlier on Saturday, the women's GB side drew their match with Belgium 1-1 before winning the shootout.

The draw earned both sides a point, with their 3-1 shootout win earning GB an extra bonus point.

The men's side fell behind on 27 minutes when Alexander Hendrickx's drag-flick deflected into the roof of the net off Tom Sorsby.

Britain equalised for a second time through Jack Waller after some neat interplay by Alan Forsyth and James Gall.

They looked set to secure a hard-earned point and force a shootout before the experienced Dohmen, making his 396th international appearance, forced the ball home from close range after Boon's deflected strike had come off the crossbar.

"We showed that we can play out there with one of the best teams in the world right now, and those fine details towards the end of the game are the things that are going to turn it," said Sorsby.

"I think we did really well to compete with those guys today, to show that we are at that level. It's just the small margins towards the ends of the games."

Britain missed a number of chances to extend their lead before Belgium levelled right on half-time with a penalty stroke from Tiphaine Duquesne.

"We were probably a bit disappointed to come away with a draw," said Great Britain captain Laura Unsworth.

"We had a really strong start and should have killed the game off in the first quarter as we had some really good chances to make it two or three-nil."

Both the men's and women's side take on Belgium again at the same venue on Sunday.