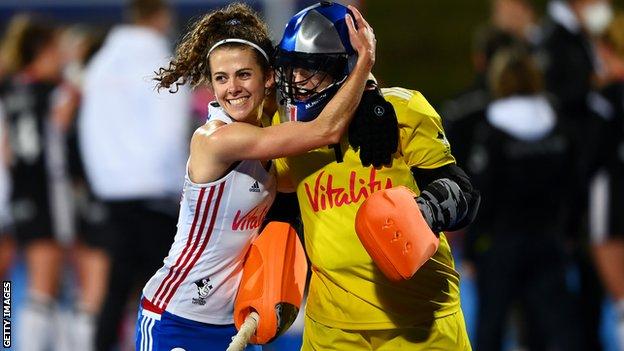 Great Britain's women cruised past the United States 5-1 to move up to fifth in the FIH Pro League.

Kelsey Briddell scored a late consolation for the visitors, who remain bottom of the table.

Earlier, Great Britain men were beaten 3-1 in a shootout by Spain after coming from behind to draw the game.

The hosts recovered from 2-0 down through goals from Liam Ansell and a last-minute equaliser by Rupert Shipperley at Lee Valley Hockey and Tennis Centre.

Spain raced into an early lead through Alvaro Iglesias and Jose Basterra.

They remain bottom of the FIH Pro League despite their shootout bonus point while Britain stay sixth.

Both the women, who will defend their Olympic title in Tokyo this summer, and the men will meet the same opponents again on Sunday.

'I stole £70,000 to feed my addiction': Meet the young gamblers struggling to overcome betting's mental gripThe Joe Wicks Podcast is back: He talks to Sir Mo Farah about choosing a positive route in life
Source