Russell was sent off in Paris on Friday night after catching Brice Dulin near the throat with his elbow as he attempted to fend off the France full-back; suspension shortened from six weeks to three after committee took into account Russell’s ‘attitude’ and ‘remorse’ Scotland fly-half Finn Russell has been given a three-match ban after being sent off for foul play in his side’s Six Nations victory over France.

Russell was sent off in the 71st minute of Scotland’s win in Paris on Friday night after catching Brice Dulin near the throat with his elbow as he attempted to fend off the France full-back.

An independent disciplinary committee decided that Russell’s act had been “properly categorised as striking with the arm”, an offence that usually warrants a six-week suspension.

However, due to several factors, including Russell’s “attitude” and “clear remorse”, his ban was shortened to three weeks, which will see him miss three matches for French club Racing 92. A summary of the hearing said: “Mr Russell accepted that he had committed an act of foul play and that it had warranted a red card. However, he did not accept that he had ‘struck’ Mr Dulin and suggested that the foul play should have been categorised as an infringement of Law 9.24 (A ball-carrier is permitted to hand off an opponent provided excessive force is not used

“The Disciplinary Committee decided that Mr Russell’s actions had been properly categorised as striking with the arm under Law 9.12 and found the offence to warrant a mid-range entry point (six weeks).

“The Disciplinary Committee identified no aggravating features. In terms of mitigation, the Disciplinary Committee gave credit for Mr Russell’s prompt acceptance that his actions had constituted foul play and been worthy of a red card, his disciplinary record, his attitude to the disciplinary process before and during the hearing, and his clear remorse (shown by his response to Mr Dulin on the pitch), and reduced the suspension by three weeks so that the final period of suspension is three weeks.” 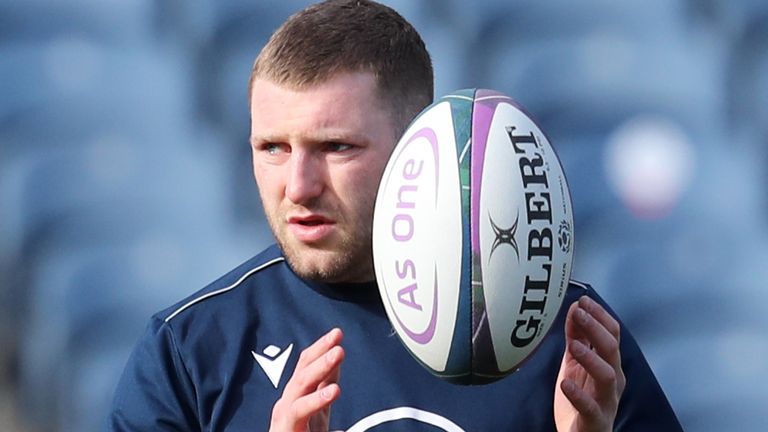 Russell helped Scotland to victories at Twickenham and in Paris

Russell, who has the right to appeal, will miss Racing’s European Champions Cup last-16 clash with Edinburgh on Sunday, and would also miss their quarter-final the following week if they were to advance.

Depending on whether Racing advance in Europe, Russell will miss either one or two Top 14 matches.

Despite ending long winless runs at Twickenham and in Paris, Scotland only finished fourth in the Six Nations, with Wales crowned champions.