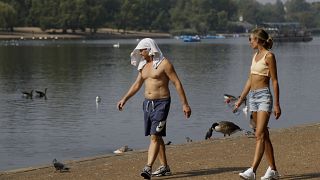 A man keeps cool with a shirt over his head as he walks alongside The Serpentine in Hyde Park in London, Aug. 12, 2020.

Britain’s meteorological agency issued its first-ever extreme weather warning, forecasting that the mercury could climb to 33°C later this week.

The Met Office said the Amber Extreme Heat Warning covers all of Wales, all of southwest England and parts of southern and central England.

It will be in force until the end of Thursday.

The UK has been under heatwave conditions in recent days but temperatures will climb further this week, possibly reaching 33°C in some western parts, the Met Office said.

These “unusually high temperatures” as well as “continuing high nighttime temperatures” can have potential impacts for heath, it noted.

Public Health England (PHE) has meanwhile extended its Heat Health Alert to Thursday. It is currently at Level 3, which requires social and healthcare services to target specific actions for high-risk groups.

Dr Owen Landeg, Scientific and Technical lead at PHE stressed that “it is important to keep checking on those who are most vulnerable such as older people and those with heart and lung conditions.”

“As we experience the first hot weather of the year, it’s important for everyone to remember to adapt their behaviours. This is particularly important during the pandemic with so many people self-isolating,” he added.

Europe in grip of 2021’s first summer heatwave, but what are the record temperatures?Merkel pledges aid, climate action after floods leave at least 190 dead

The Met Office created its extreme heat warning in June 2021 to inform the public of potential widespread disruption and adverse health effects.

It explained at the time that as a result of climate change, the UK is now much more likely to see prolonged spells of hot weather and that this can impact health and even cause death — more than 2,250 excess deaths were reported during heatwaves in the summer of 2020. But it can also negatively impact infrastructure, including transport and energy, as well as the wider business community.

It also flagged that record-breaking temperatures observed in the 2018 summer season are now 30 times more likely than in pre-industrial times and that they could become the new normal by the 2050s because of climate change.

Some parts of Western Europe have been battered by rain with up to two months of rainfall observed in just two days on soils that were already near saturation. This triggered devastating and deadly floods in Germany and Belgium where nearly 200 people have lost their lives.

Northern Europe, however, was sweltering under an extended heatwave. Finland also recorded its warmest June on record.