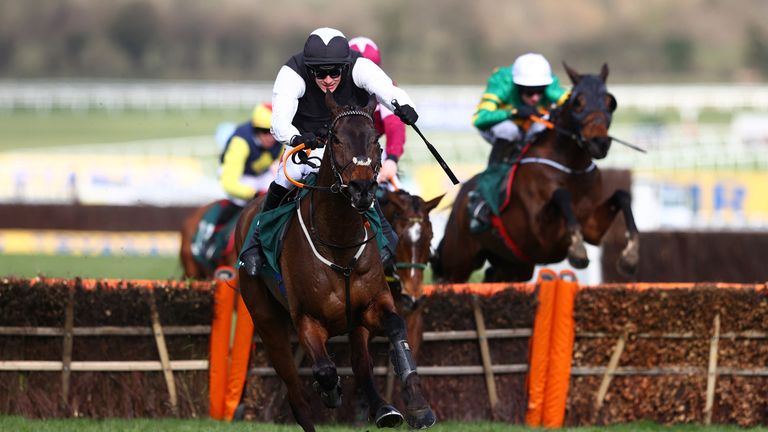 Danny Mullins finally got his first Cheltenham Festival winner when making the most of a chance ride on Flooring Porter in the Paddy Power Stayers’ Hurdle.

Mullins had gone so close many times in the past, but was fortunate enough to pick up the mount after Jonathan Moore, who led the horse up, had to miss the ride through injury.

Flooring Porter, trained by Gavin Cromwell, was a handicapper earlier in the season – but showed he was much better than that when winning the Grade One Christmas Hurdle at Leopardstown.

He made all that day and the same tactics were deployed again to great effect.

No horse could get close enough to threaten the 12-1 winner, who powered up the hill to cross the line three and a quarter lengths ahead of Sire Du Berlais.

Paisley Park, winner in 2019, tried hard in defeat, a length and three-quarters away in third place. Beacon Edge was another half a length back in fourth.

A recent fall had left Moore him facing a race against time to make Cheltenham. He had a sit on his proposed big-race mount, but declared himself unfit and recommended Mullins to Cromwell.

Cromwell praised the selflessness of Moore and said: “It was a huge performance and a smashing ride. It was a big blow for Jonathan, he made the decision himself that he wouldn’t do the horse justice.

“He suggested Danny would be suited to the horse and it was all down to Jonny’s instructions.

“Hats off to Johnny, he’s so unselfish – he thought he wouldn’t do the horse justice, so I’m very grateful. He actually sat on him.”

Cromwell had mentioned prior to the Festival he was worried about the fact there was no rail the whole way round, as Flooring Porter has lugged left in the past. But there were no signs of any misdemeanours.

“He ran straight and true today, bar going right at the last. Other than that he was grand,” said Cromwell.

“He won a Grade B handicap at Navan when it wasn’t the plan to make the running. He decided on his tactics so we went along with it.

“We won the Champion Hurdle a few years ago so to win another championship race is fantastic.

“The owners are a syndicate from Galway, they are a great bunch and it’s an awful pity they can’t be here.

“Everybody knows how hard it is to get a good horse. We came across this lad by accident, he was a very cheap store so it’s a bit of a fairytale really – it just goes to show dreams can still happen.”

Mullins was also quick to pay tribute to Moore.

He said: “It was fantastic. He’s a very good horse. I got the call-up about an hour beforehand and in fairness to Jonathan Moore he gave me every bit of information he had about the horse.

“Credit to him. He knew he wasn’t in good shape this morning and stood himself down – it’s the mark of a great man.

“Jonathan wanted everything to go well and I’m sure he’ll be back for Punchestown and well able to reunite the partnership.

“It’s fantastic to get my first winner on the board at Cheltenham, in a Grade One as well.

“I know there’s no crowd here, but I’m really enjoying it that’s for sure.”