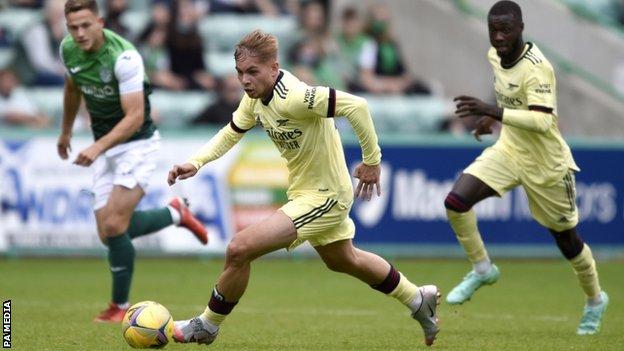 Inter Milan have joined Arsenal in withdrawing from the Florida Cup because of the Covid-19 pandemic.

The Gunners cancelled their pre-season trip to the US after a "small number" of their touring party tested positive for Covid-19.

Inter subsequently also pulled out because of the "risks" of international travel in spreading the virus.

Both sides were scheduled to play in the event with Everton and Colombia's Millonarios.

Organisers said Sunday's match at between the two remaining sides at Camping World Stadium, Orlando, will still go ahead and "additional updates to the tournament schedule will be announced shortly".

Arsenal did not specify how many members of their touring group tested positive, nor if any were players.

"This difficult decision is based on ensuring the health and wellbeing of players and staff," a statement read.

The club said they were "glad to say" none of those who had tested positive were currently displaying symptoms, but all were in self-isolation at their respective homes.

"We fully understand what a disappointment this is for our supporters in America, who were looking forward to seeing us compete in the Florida Cup as part of our pre-season build-up," the statement added.

"Our apologies also go to the organisers of the Florida Cup who had done a fantastic job making the preparations and our partners who had arranged events around our participation in the competition.

"We are now making alternative arrangements in line with the Premier League protocols to continue our preparations for the new season."

Inter said their decision was "in consideration of the risks that, at present, international travel involves as a result of the evolution of the spread of the pandemic, risks that have already caused the withdrawal of Arsenal".

Organisers said they "regret" Inter's decision to withdraw and will refund fans who purchased tickets for the original line-up of the tournament.