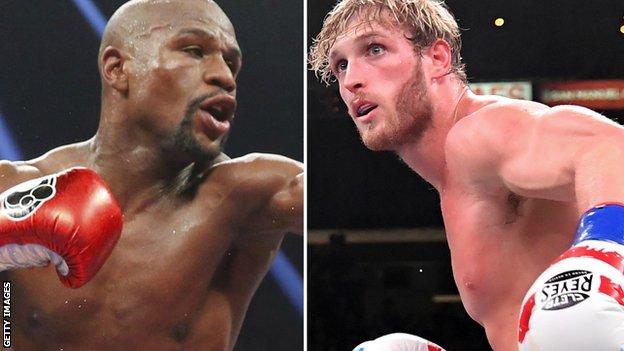 Decorated former world champion Floyd Mayweather (left) has a professional record of 50-0, while Logan Paul lost his only previous professional bout against a fellow YouTuber

The bout will take place at Miami's Hard Rock Stadium four months after they were initially scheduled to meet.

Mayweather, 44, ended his career unbeaten in 50 bouts and last fought in 2017, defeating MMA star Conor McGregor in one of the richest bouts in history.

Paul, 26, lost his only previous professional fight in 2019.

That defeat for the American came against Briton and fellow YouTuber KSI in Los Angeles.

In a tweet promoting his next fight against the undefeated former champion, Paul wrote: "Full transparency my mom is terrified".

Mayweather took to social media to announce the new date of the fight, calling it an "epic event".

The fight is likely to draw huge pay-per-view numbers and is the latest chance for Mayweather to take on an opponent beyond the traditional boxing world.

In December 2018, he needed just 140 seconds to beat Japanese kickboxer Tenshin Nasukawa in an exhibition boxing bout worth a reported $9m (£6.7m).

Jake Paul v Ben Askren: YouTube star wins with knockout inside two minutesSnooker-tastic!: The heroes and villains that helped snooker reach its glory yearsHave an evening in with films on iPlayer: From action to romance, there's a movie for everyone
Source