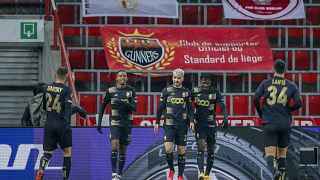 Belgium’s leading football clubs have supported a proposal to merge their league with the Netherlands.

The Belgian Pro League has announced that its general assembly unanimously voted in favour of an “agreement in principle” for a possible cross-border ‘BeNeLeague’.

The league said in a statement on Tuesday that the move concerned the “direction” of professional football in Belgium.

“This ambition is based both on respect for the sporting aspirations of the big clubs and on the need for economic stability of the other professional clubs,” it said.

“The 25 clubs are unanimous in their desire to give the Beneleague a fair chance.”

Last year, the Belgian Pro League was the first major European competition to be cancelled due to the COVID-19 pandemic.

The details and format of a cross-border competition with the Netherlands have been discussed for months but no formal proposals have yet been unveiled.

The project has raised concerns among football supporters’ groups, who fear that the BeNeLeague would only favour the larger clubs in the country, such as current champions Club Brugge, Anderlecht, and Standard Liège.

The management of the Pro League has said they will now play “an active role” in the project to ensure all teams benefit, even if they are not participating.

“The BeNeleague must go hand in hand with the guarantee of economic stability for the other professional clubs through the creation of a national first division championship based on sustainable licensing and competition rules,” the league added.

“The project also implies that the youth teams of the professional clubs can quickly develop into the national amateur series.”

Last year, Deloitte calculated that a merger could generate up to €400 million per year in marketing and television rights deals, according to Belgian media.

The concept of a BeNeLeague between Belgian and Dutch football clubs has been trialled previously.

However, in just its second year, financial difficulties and disagreements meant two participating teams disappeared. And after just three seasons, the BeNeLeague was discontinued and both nations returned to their own national competitions.

It’s not clear if the new proposals would follow a similar league structure as the previous project.

Initially, the women’s BeNeLeague was divided into two national leagues for the first stage, before merging for a competitive cross-border ‘A’ and ‘B’ league. These would then decide relegation and European qualification.

In 2013, this was then changed to a single league comprising 14 teams from both countries.

The proposed BeNeLeague would not be the first in Europe to feature teams from two separate nations or principalities.

In the United Kingdom, Cardiff City, Swansea City, Newport County, and Wrexham all compete in the English football league system, as opposed to the Welsh leagues.

Elsewhere, FC Andorra play Spain’s Segunda División B, and AS Monaco were crowned champions of the French Ligue 1 as recently as 2016-17.

Meanwhile, all football clubs in Liechtenstein play in the Swiss Football League system, as the country has no properly recognised league of its own.