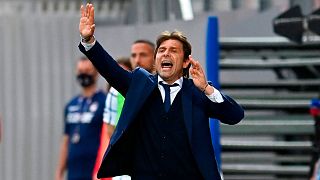 A statement on the club’s website on Wednesday evening read: “FC Internazionale Milano can confirm that an agreement has been reached with Antonio Conte for the termination of his contract by mutual consent.

“The club would like to thank Antonio for the extraordinary work that he has done, culminating in Inter’s 19th top-flight title.

“Antonio Conte will forever remain a part of our club’s history.”

Conte arrived in Milan in 2019 having previously managed London club Chelsea and the Italian national side.

Earlier this month, he led Inter to their first Seria A title since 2010.

Conte was reportedly unhappy about the club’s decision to sell players in this coming transfer window because of financial constraints.

Inter’s finances were hit badly by the coronavirus pandemic, as well as the club’s early elimination from European football, and the club was forced to take out a vast loan from Oaktree Capital recently in a financing deal with the American investment fund.

Inter’s owner Suning and president Steven Zhang reportedly wanted to slash the wage bill by 20% and make a profit of around €100 million in the transfer market, likely by selling at least one of the club’s most important players.