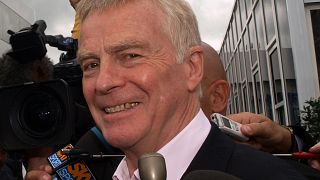 Former Formula 1 boss Max Mosley has died at the age of 81.

In a statement shared with Euronews, a Formula One spokesperson said organisers were saddened to hear that Mosley had passed away.

“A huge figure in the transition of Formula 1,” they said. “Our thoughts are with his family and friends at this sad time”.

Mosley began his career in motor racing as an amateur driver.

He went on to become the president of the Fédération Internationale de l’Automobile (FIA) in 1993 after serving in a number of other roles in motorsport administration, including with Formula One.

He was re-elected for three terms as head of the FIA, before standing down in 2009. While Mosley became known for his leadership in the motorsport world, he also went on to become a prominent campaigner for stronger press controls.

The former F1 leader became an outspoken voice for tighter press regulations after stories about his sex life began to appear in both the British media and in the courts.

Mosley was born in London in 1940 and attended schools in the UK, France and Germany, before studying physics at Oxford University, according to a biography on the FIA’s website.

He later trained as a lawyer and went on to become a barrister focused on patent and trademark law.

In his leisure time, he had enjoyed racing cars, but he retired from driving in 1969 to cofound his own company, March Engineering, which went on to become one of the world’s leading racing car manufacturers.