Hydrogen could play a role in the future – F1's Brawn

Hydrogen-powered cars could be the future of Formula 1, according to F1 managing director for motorsports Ross Brawn.

He says sustainability is now a central objective for the sport, which has committed to become carbon neutral by 2030.

The engineer behind Michael Schumacher's seven world titles ruled out a switch to fully electric vehicles.

"Maybe hydrogen is the route that Formula 1 can have where we keep the noise, we keep the emotion but we move into a different solution," Brawn told the BBC.

The British driver, who came third in this month's Austrian Grand Prix, worries going electric would take much of the atmosphere away from the sport.

"Something I love about Formula 1 and the race cars we drive is the sound and feeling you get from them," he says. "That's what makes it so cool and special and why the fans love it."

I love the noise and feeling from F1 engines – Norris

Formula 1 has one of the most ambitious sustainability programmes of any major sport and in 2019 it announced its plan to go net zero by 2030 with targets including:

The sport has taken steps to reduce the number of people and freight that travels between race venues and has slimmed down its travelling media operation.

Brawn says teams have reduced the numbers of people who travel to races by a third, down from about 3,000 people to 2,000.

F1 has also significantly reduced the personnel involved in the media operation abroad. The media feeds from all races are now produced and broadcast from the sport's HQ at Biggin Hill in Kent.

But Formula 1 has been criticised by environmentalists because so much of its effort depends on offsetting – funding activities that reduce emissions elsewhere to match the greenhouse gases the sport produces.

Brawn acknowledges that as the most prestigious motorsport tournament in the world, Formula 1 can play an important role shaping fans' attitudes to sustainability and climate change.

But he says F1 has no plans to move away from hybrid motors which combine internal combustion and electric engines during this phase of the sport's evolution.

"If you're lecturing to an empty chamber you're not getting any message across," argues Brawn. "You have to engage the fans and the reason they come is they want to see great cars, great drivers doing battle."

Many countries, including the UK, have set deadlines in the next two decades for phasing out the sale of petrol and diesel vehicles but Formula 1 is making no such commitment.

"We have a one-and-a-half-hour race, we have 1,000 horsepower cars, we are the pinnacle of motorsport. You can't get that bang without fossil fuels," Brawn adds.

He points out that the high-tech turbo hybrid power units used to power Formula 1 cars since 2014 are among the most efficient ever designed in terms of the percentage of fuel energy that is converted into power – a measure known as thermal efficiency.

F1 engines have a thermal efficiency rating of about 50%, while road-car petrol engines are generally in the region of 30%.

For the moment the sport's focus will be on developing synthetic fuels which use carbon captured from the air, farm waste or biomass.

Formula 1 rules already demand that the petrol used in F1 contains at least 10% biofuel and that proportion is likely to increase.

But environmentalists say because synthetic fuels and biofuels still produce carbon dioxide they continue to drive global warming and therefore cannot be a long-term solution.

In October Honda, which supplies engines to the Red Bull team whose driver Max Verstappen is currently leading the championship, announced it would be pulling out of F1 at the end of this year to concentrate its engineering focus on carbon-free technology. 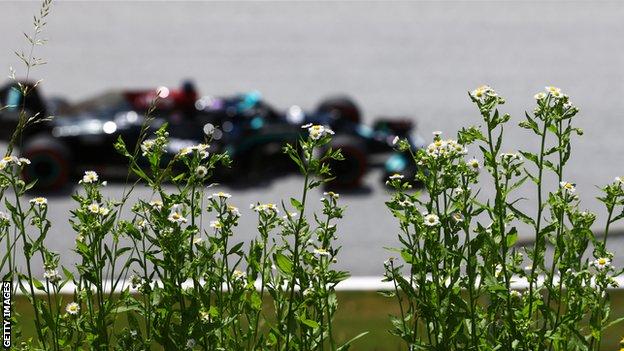 F1 can't be a dinosaur

Replacing carbon-based fuels will be a huge challenge for Formula 1, Brawn acknowledges.

He says the sport will always be about speed and acceleration across 90-minute races and does not think that electric vehicles will capable of delivering the performance it demands for decades, if ever.

"We don't want [drivers] looking at power conservation modes and trying to make the battery last long enough to get to the end of the race or saving the battery up so in the last five laps, they can really go for it. That doesn't seem to engage the fans."

That is why, Brawn concludes, "there is no electric solution today".

However, he recognises F1 faces growing pressure to raise its game on sustainability from drivers, F1 teams, the manufacturers and fans.

"We can't have a sport which is seen as a dinosaur and out of step. We will always be mindful of that," says Brawn.

He says the younger drivers are far more engaged in the topic than they would have been in the past.

Norris is impressed that established drivers like Hamilton and Vettel have used their platform to champion environmental and other causes.

"It is definitely something that over the coming years I'll pay more and more attention to," he says.

Zak Brown, chief executive of Norris' McLaren team, confirmed there "are a lot of conversations going on right now in Formula 1" about sustainability but, like Brawn, he believes cars capable of 220mph or more are an essential part of the sport.

"We've always been a technology leader, whether that's been in safety that's come out of Formula 1 or carbon fibre materials to now how are we going to make our engines the most sustainable vehicles," he tells the BBC.

McLaren made a commitment to go carbon neutral in 2011 and Brown says there is a lot of interest in the potential of hydrogen among Formula 1 teams.

"The challenge that we have is to make sure it is safe and can produce the amount of power that's required to be able to do the lap times that we do, and hydrogen is very much on the table."

Both men say they want to harness Formula 1's proven ability to drive cutting-edge innovation to deliver sustainable solutions for the sport.

But they also point out that the emissions from the engines of the racing cars is a tiny fraction of the sport's total emissions.

F1 estimates that 0.7% of the sport's emissions are from the race cars themselves while almost half comes from the logistical caravan that moves equipment and personnel to the races, of which there are a record 23 planned this season.

But Brawn has categorically ruled out reducing the number of races to cut emissions.

He says bringing the races to countries around the world is part of what makes the championship great but he acknowledges there is also a financial imperative.

"At the end of the day, we're a business," says Brawn. "We have to generate income to make this whole thing work, and, obviously, the more races we have, the more profitable it is."