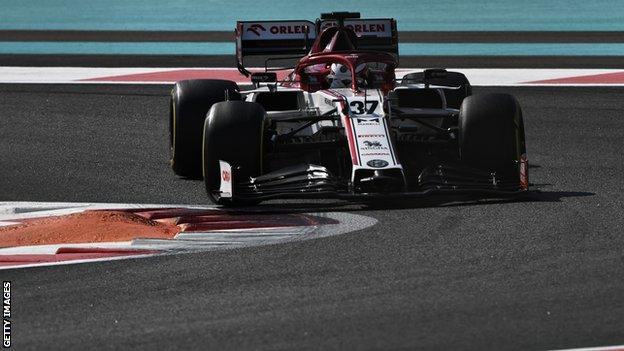 Ilott drove for Alfa during a test last December

Ilott will share reserve driver duties with Robert Kubica when the Pole is unavailable as a result of his commitments in other racing categories.

Ilott, a member of the Ferrari driver academy, will take part in some first practice sessions in 2021, starting at this weekend's Portuguese Grand Prix.

Alfa Romeo team boss Frederic Vasseur said Ilott, 22, was "one of the most talented coming through the ranks".

Ilott, runner-up to new Haas F1 driver Mick Schumacher in Formula 2 in 2020, is also Ferrari's test driver this year and is racing a Ferrari 488 GT3 in the GT World Challenge Europe Endurance Cup.

Ilott said: "The two (test) sessions I had with the team in the last two years have been extremely useful in getting me accustomed to the way a Formula 1 team works and I am confident I can hit the ground running in my new role as one of the reserve drivers at Alfa Romeo Racing.

"I can't wait to be in the car and help the team continue its progress."