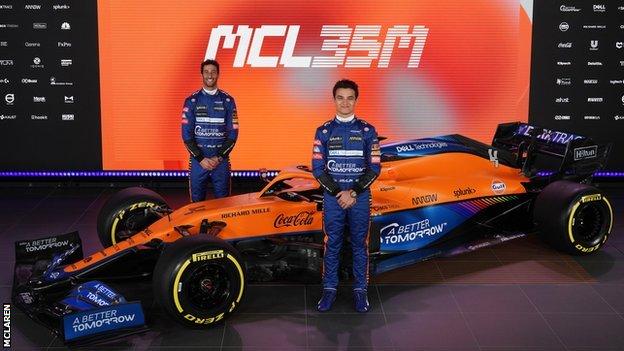 Daniel Ricciardo says he is "excited" about his prospects at McLaren, as the team launch their new car and driver line-up for the 2021 season.

The Australian has signed a three-year contract with McLaren, who are switching from Renault to Mercedes engines in 2021.

Ricciardo, who joins after two years at Renault, said: "Everything I have seen excites me about where McLaren is heading.

"I really believe in the personnel."

He added: "They are doing what it takes to be a real contender in the championship."

Ricciardo, who won seven races for Red Bull between 2014 and 2018 before deciding to leave for Renault, made the decision to join McLaren before the delayed start of last season, after just one season with the French car manufacturer.

He said he believed McLaren was his best option for the advent of a major technical rule change Formula 1 is introducing in 2022.

"We don't have a crystal ball," he said. "Leaving Red Bull or Renault, it is what I feel is right. Do I know how it will turn out? I don't. But I certainly feel McLaren have done the right things to set themselves up in particular for these rule changes coming in 2022."

Ricciardo joins Briton Lando Norris at the team that finished third in the constructors' championship last season, winning a close fight with Racing Point and Renault behind dominant champions Mercedes and closest rivals Red Bull at the final race of the season.

He said he expected a similarly tough battle behind the top two teams in 2021.

"More teams than not finished on the podium last year," Ricciardo said. "The battle to get to the front was getting more intense. For the rest of us, we are trying to close on Mercedes. I see it as most teams having a chance of a podium."

Ricciardo had previous talks about joining McLaren when he left Red Bull, before ultimately deciding in favour of Renault.

He said he had been convinced McLaren were on the right track by the senior management changes at the team since, especially the hiring of Andreas Seidl as team principal and James Key as technical director.

McLaren ended 2018 with the second-slowest car on the grid, but have gone from sixth, to fourth to third in the championship in the last three years as these changes have come on stream.

Norris looking forward to the challenge

Norris said he had recovered from catching coronavirus over the winter, and that for him the disease "wasn't too bad – it was a few days of having no taste and smell and just feeling very drained and tired for a couple of weeks".

The 21-year-old, whose former team-mate Carlos Sainz has moved to Ferrari, said he saw the arrival of an experienced winner alongside him as "a positive – he can win and score podiums, do pretty much everything. I can learn more from a different driver. It is good to experience something different."

Norris, who finished on the podium in the first race of last season on his way to ninth in the championship, did not set himself any specific targets for this year.

"Last year, I was very happy with how I did. There were things to improve but on the whole it was a much better season than year one (in 2019). I'm happy, but I have different things to work on and working alongside Daniel will help me become a better driver too." 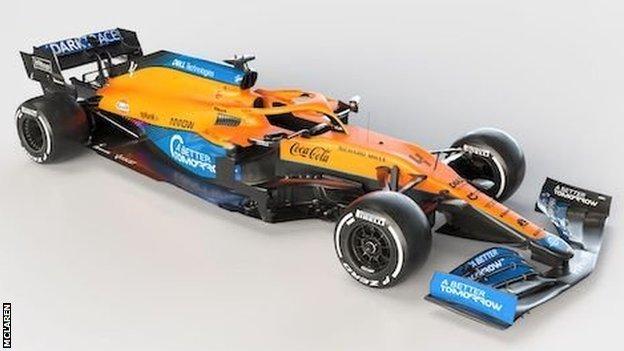 McLaren have launched their new car for the 2021 season

Seidl said it had been "a great achievement" to secure third place last year and that there were "a lot of positives" heading into the new season.

"In terms of driver line-up, we will have one of the strongest in the paddock," the German said. "We have a title-winning power-unit in the back of the car. But we shouldn't forget the battle we were in last year. We have a lot of respect for these people."

McLaren Racing chief executive officer Zak Brown said: "The goal is to close the gap to the front.

"The field is unbelievably close. Challenging for the championship would be unrealistic given the journey we are on.

"All we can hope for is to close the gap to Mercedes, who we anticipate to be the fastest team in 2021. The rules haven't changed significantly, so I don't think 2021 will look that different to 2020, other than expecting it to get closer."

The new car, the MCL35M, is an evolution of last year's car – as will be the case for all teams with the imposition of rules restricting development aimed at cost-saving as a result of the pandemic.

McLaren were restricted by an agreement with governing body the FIA on how much they could develop its mechanical parts because of the significant number of changes needed to accommodate the Mercedes engine.

But all teams are free to do as much aerodynamic development as they wish, to deal with rule tweaks that have imposed bodywork changes with the aim of halting the rapid increase in downforce and cornering speeds.

The car will run for the first time in a test at Silverstone on Tuesday, with both drivers taking a turn behind the wheel. Mileage is restricted by regulations to 100km (62 miles).