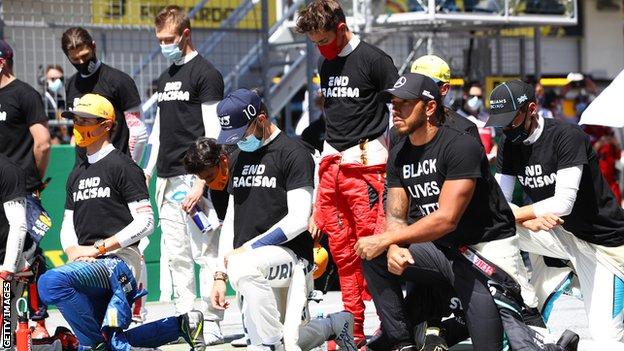 Some drivers knelt and others stood before races last season

Formula 1 drivers will be allowed to take the knee to demonstrate their opposition to racism before Grands Prix again this season.

The move is part of an initiative to promote "sustainability, diversity and inclusion, and community".

Unlike last year, the pre-race demonstration will not just be devoted to anti-racism and drivers will not be required to wear 'End Racism' t-shirts.

Drivers will choose their own gesture to support inclusivity on the grid.

An F1 spokesman said: "The whole of F1 is united in its support for We Race As One and the drivers will all show their own support for the initiative ahead of the Grand Prix.

"The drivers will be free to show their commitment in their own way before the race and there will be no requirement for them to make a specific gesture.

Hamilton to 'keep pushing' in fight against racism

"The important thing is all of them being together in full support of our initiatives on sustainability, diversity and inclusion and community."

Lewis Hamilton, the sport's only black driver, led the pre-race anti-racism demonstrations last season, which arose from the global outcry following the death of unarmed black man George Floyd at the hands of US police.

The drivers discussed how to handle the pre-race demonstration heading into a new season with new F1 boss Stefano Domenicali at pre-season testing in Bahrain two weeks ago.

The result is that Hamilton and others will be able to continue to take the knee to show their support for anti-racism should they choose to do so, but that individual drivers may choose to highlight different issues and mark that support with different gestures.

Hamilton said before the meeting: "It is not the most important thing that everyone takes the knee. It is more the action in the background.

"As things die down, [racism] continues to be an issue that affects my day-to-day life and so many people out there.

"It is really important to continue to hold uncomfortable conversations with people, change is possible and change is needed."