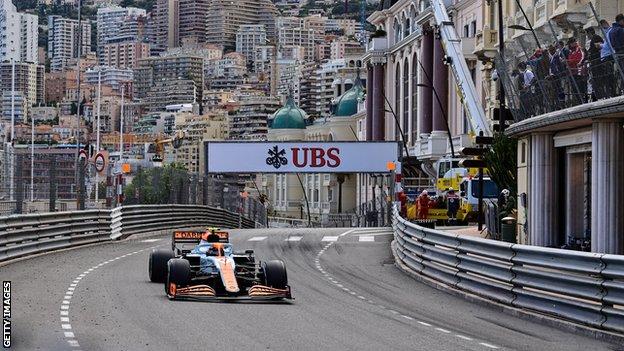 McLaren will race in the climate-aware off-road series Extreme E next year.

The illustrious Formula 1 team, who have eight constructors' titles, join seven-time F1 champion Lewis Hamilton, whose own X44 team is currently competing in the inaugural season.

"Our attention was immediately drawn by the innovative format of this motorsport platform," said McLaren chief executive officer Zak Brown.

Extreme is streamed live across the BBC iPlayer and BBC Sport website.

Brown added: "It gives us the ability to accelerate and boost our own overarching sustainability agenda, which shares the same priorities of decarbonisation, waste reduction, diversity and equality."

Extreme E is two races into its five-race season, in which cars travel on a 'floating paddock' – the St Helena ship – to remote locations around the world to race electric SUVs as well as raise awareness on areas affected by climate change.

So far both races have been won by RXR – a team entered by 2016 F1 world champion Nico Rosberg.

The Woking-based McLaren team were behind all of Ayrton Senna's world titles in the late '80s and early '90s, as well as Lewis Hamilton's first F1 title win in 2008.

McLaren currently sit fourth in the F1 standings following a positive start to the 2021 season, including a third-placed finish for British driver Lando Norris in Monaco last month.

It is not yet clear who McLaren want to drive the car next year – in which a male and female driver share the role across race weekends – but Brown said: "We are looking to replicate our F1 and Indycar programmes. We want to find the two fastest and most exciting drivers out there.

"The women driving in Extreme E now are of a very high calibre. To win in Extreme E we need two great drivers and the best leadership."

And Brown acknowledged that, following a difficult week for the team in which they lost a "founding father" with the death of key figure Mansour Ojjeh, the Extreme E project gave the team a sense of pride.

"He was a titan of motorsport for 40 years. There's been a variety of emotions [for the team]. This Extreme E project reflects Mansour's values."