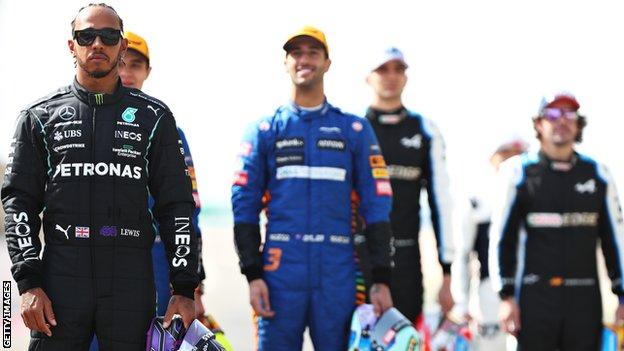 Formula 1 finds itself at a crossroads, a junction in history, as it embarks on a marathon 2021 World Championship.

The sport has set its ambitions high in embarking on what is planned to be its longest season in the middle of a pandemic.

But whether it runs to full length or not, it is set to be a momentous year.

Lewis Hamilton, the dominant figure of his generation, could end it with an all-time record eighth drivers' title. But the year may also be the Mercedes driver's swansong, as he starts it with a contract only for 2021, and has so far equivocated on whether he wants to continue after that.

To save money, teams have been forced to carry over large parts of their cars from last season. But a rule change aimed at slowing them down – or at least preventing them from getting significantly faster – means there remains every chance of a change in the competitive order.

Mercedes start the year as favourites after seven consecutive world title doubles, but Red Bull and engine partner Honda have pulled out all the stops in the final year of the Japanese company's time in F1. 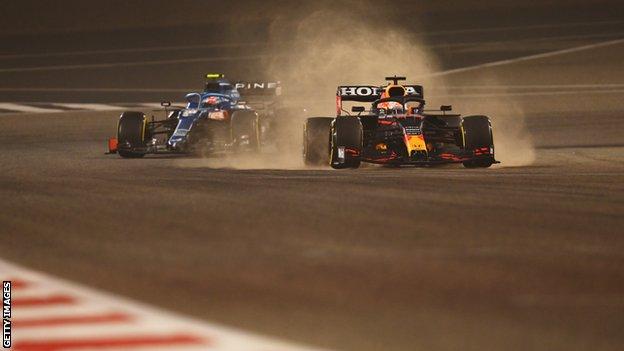 Red Bull, and Honda, look strong at the beginning of the season for the first time in in years

Hamilton's quest for another record

Britain's Hamilton starts the year already installed as the most successful racing driver in history. His seventh title last season matched the achievement of Michael Schumacher, while the 36-year-old stands alone at the top of the lists of wins and pole positions.

Starting the year with 95 victories, Hamilton could well pass the century mark in 2021, an unprecedented, mind-bending achievement that not so long ago was thought impossible.

On paper, the eighth title appears close to a gimme. Hamilton and Mercedes dominated last year, his team-mate Valtteri Bottas has not yet proved capable of challenging him consistently over a season and changes to cars have been restricted over the winter.

In reality, though, it may not be the walkover many would have predicted a couple of months ago.

To prevent further escalation in cornering speeds, a couple of significant rule changes have been made at the back of the car, cutting away parts of the floor and diffuser, both critical in producing aerodynamic downforce.

Mercedes technical director James Allison describes these as "a sort of regulatory vandalism that actually knocked the performance of the car right back about a year and a half". They change the airflow requirements at the rear, forcing teams to reassess how to claw back the lost downforce.

Pre-season testing did not go well for the world champions, Mercedes struggling with a nervous and skittish car, and Hamilton concluding they had "a lot of work to do".

But one has to assume they will eventually get on top of this and emerge as the usual formidable force, as they did in 2017 and 2018, when they started the season on the back foot against a generally quicker Ferrari.

Red Bull, by contrast, had what motorsport director Helmut Marko described as their best ever pre-season test. Could this be the year that Red Bull, with an all-new Honda engine brought forward from 2022 because of the Japanese company's withdrawal from F1 at the end of 2021, finally go toe-to-toe with Mercedes?

If they can, the prospect of a straight fight between Hamilton and 23-year-old Max Verstappen, one of the two leading figures of the new generation of drivers, is mouth-watering. 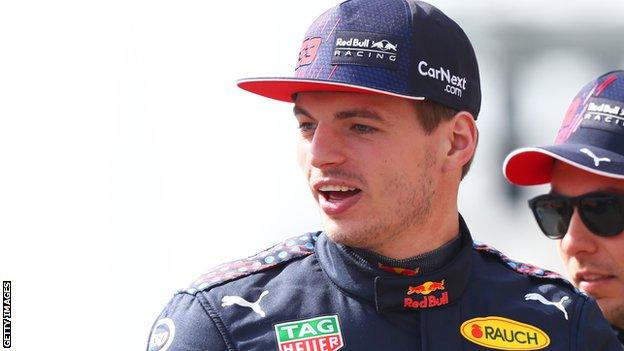 Verstappen is considered to be one of the best drivers on the grid, along with Hamilton and Leclerc

The 2021 season starts with a significant reshuffle of the driver line-ups at the leading teams. Of those who finished in the top six of the championship last season, only Mercedes have the same two drivers this year as in 2020.

And each combination is full of intrigue, meaning and consequence.

Sebastian Vettel – fresh from a bru ising two years alongside Charles Leclerc at Ferrari – has found a new home at the renamed Aston Martin team, as team-mate to Lance Stroll, son of the owner.

It has not been a great last seven years for Vettel. He has been outpaced at Red Bull by Daniel Ricciardo, been less superior to Kimi Raikkonen as a team-mate at Ferrari than Fernando Alonso was, made a series of high-profile and damaging driving errors, compromised at least one and possibly two chances to win the title, been outclassed by Leclerc, and been deemed surplus to requirements at Ferrari.

As a consequence, he has some reputation rebuilding to do, regardless of his four world titles and 53 race victories.

Alonso, meanwhile, is back in F1 after two years racing in other categories, driving for the Alpine team, formerly Renault.

Alonso's sights, and those of his team, are set on the 2022 regulations, and a hoped for shake-up of the grid. But in the meantime, the 39-year-old Spaniard will want to put away team-mate Esteban Ocon to prove his belief that he is as good as ever. For his part, Ocon cannot afford to be beaten if he wants to be considered a potential future world champion.

Alonso has taken the seat formerly occupied by Ricciardo, following the Australian's move to McLaren. There, the battle between a proven winner and British rising star Lando Norris will be fascinating. As with Ocon, Norris will have to at least match his team-mate if he wants his career to keep picking up momentum.

This cascade of moves was started because Ferrari chose Carlos Sainz as the man they wanted to replace Vettel.

The Spaniard could not resist the lure of Maranello, and says it was his dream to drive for Ferrari, but in team-mate Leclerc he faces a daunting challenge.

The 23-year-old from Monaco is a rare talent, considered by many to be right up with Hamilton and Verstappen, and his speed on qualifying laps is often breathtaking.

Sainz is quick and intelligent and has driven some excellent races over the past two years at McLaren. Even so, it will be no easy task to prevent himself being consigned to the support role Ferrari clearly envisage for him.

Finally, Sergio Perez was the man dropped by what was called Racing Point to make way for Vettel, but his reward for probably his strongest season yet last year is a promotion to Red Bull.

The team wanted the Mexican because they feel he will be a more solid back-up for Verstappen, particularly in races, than his inexperienced predecessors, Pierre Gasly and Alex Albon.

Perez, on a one-year contract for now, is thrilled by the opportunity, but well aware he has his work cut out. If he can be close enough to Verstappen in races to enable Red Bull to play some strategic games with Mercedes, that will go a long way to making the team happy.

The end of unlimited spending

While money has never guaranteed success in F1, if you want reasons why the championships in the 2010s were won by only two teams – Red Bull and Mercedes – their budgets are a good starting point.

They outspent every other team on the grid bar Ferrari – by a significant amount – and they outperformed them, too.

But F1 undergoes what is no less than a revolution this year, with the introduction of the first budget cap.

This limits all teams to a maximum spend of $145m (currently £114.2m) a year, with exemptions for driver salaries, those of a handful of senior executives and marketing. This figure decreases by a further $5m in each of the next two seasons.

On top of this, in an attempt to speed up the process of reducing the performance spread across the field, the budget cap has been twinned with a handicap system for research and development.

A sliding scale has been set up that means the higher up in the previous year's championship a team finishes, the less wind-tunnel time and computational aerodynamic design research they can use.

This will not mean a sudden equalisation across the grid. The bigger teams have engrained advantages that will take some time to cancel out. But it is a first step in a direction of travel whose next major development is the introduction of the 2022 rules, aimed at creating cars that can race much more closely together and overtake more easily.

Budget caps and a measure of handicapping are not the only departure from tradition this year. Another will be the trial of sprint-race qualifying at three grands prix, with the grid for the main race set by a shorter event on the Saturday afternoon.

All these developments are the work of F1 owner Liberty Media, which took over the sport in 2017 and has been reshaping it with the intention of increasing its profitability over the next five to seven years.

The architect of the changes was Chase Carey, who remains involved to a degree as non-executive chairman, but who has handed over the reins to the sport's new president, Stefano Domenicali.

It is the Italian, a former Ferrari team principal, and widely respected as a man of charm and honour, who has the responsibility of shepherding F1 through the start of its new era.

There are many challenges to come. Among them, finding a way to take action on diversity after the demonstrations of last year, reviving revenues hit by the pandemic, and working out whether less might actually be more in terms of a calendar whose extension to 23 races this year has left many teams feeling F1 has gone too far.

But in Domenicali the sense is that F1 has chosen a good man to face them. Now he has to live up to expectations.