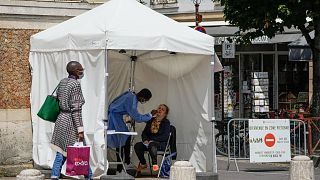 A COVID health pass is from Wednesday required to visit leisure and cultural venues across France as the country battles a new surge in infections.

The pass attests that the holder has either been fully vaccinated, has tested negative over the previous 24 hours or that has recovered from COVID during the previous six months.

The new measure was announced last week by President Emmanuel Macron in a bid to boost vaccinations. The pass will also become mandatory to visit bars, restaurants, shopping centres, nursing homes as well as to travel on public transport for long-distance trips come early August.

Its roll-out comes a day after the country recorded 18,181 new infections in 24 hours — more than double the figure from just a week ago.

Health Minister Olivier Véran told French MPs on Tuesday afternoon that “we were yesterday at 18,000 contaminations over 24 hours only” when fewer than 7,000 were observed a week ago.

Véran attributed the rise to the Delta variant, which was first detected in India.

“This means that we have an increase in the circulation of the virus of the order of 150% over a week: we have never experienced this, neither with (the original strain of) Covid, nor with the English variant, nor with the South African nor with the Brazilian one,” he said.

The last time France recorded more than 18,000 new daily infections was on May 13, when the country was under a nighttime curfew and non-essential shops, bars and restaurants were ordered shut.

On Monday, health authorities had reported 4,151 new cases, taking the total number of infections to more than 5.8 million — the fifth-highest tally in the world. The number was low as fewer people get tested on Sundays but infections have been steadily rising for over a week in France following nearly two months of decline.

The decrease, which took place as the country was easing restrictions, was largely attributed to the vaccination campaign and Véran urged people to get jabbed to derail the new surge of cases.

“We have a weapon, vaccination,” he said. “The time for doubt and hesitation is over, the time for collective immunity is now, it’s a collective responsibility and it’s the only way we have (…) to get rid of COVID once and for all.”

The government currently estimates that it will reach its target of 40 million primo-vaccinations by the end of July — a month earlier than its initial schedule.

More than 37.8 million people have received at least one dose of the vaccine against COVID-19 and 30.7 million are considered fully vaccinated.

Macron also announced that COVID tests will only be free if prescribed by a doctor. Unvaccinated people wishing to get tested to travel or visit museums, cinemas, bars and restaurants will have to pay.