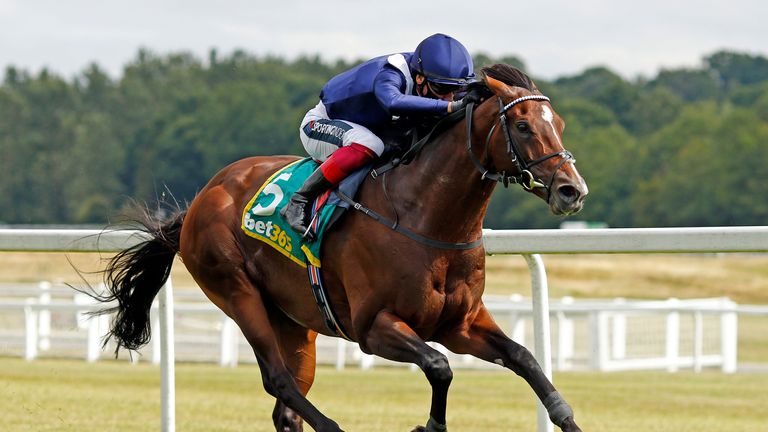 Frankie Dettori is confident Global Giant can get his season off to a successful start in the Earl of Sefton Stakes at Newmarket.

The popular Italian will be riding in Britain for the first time this year on day two of the Craven Meeting on the Rowley Mile.

His first ride is aboard the John and Thady Gosden-trained Global Giant, who will be a hot favourite to strike Group Three gold following a runaway success in the Listed Magnolia Stakes at Kempton last month.

The six-year-old had previously been on his travels during the winter – filling the runner-up spot in the Bahrain International Trophy before finishing down the field behind esteemed stable companion Mishriff in the Saudi Cup.

“I’m looking forward to riding back in Britain and getting back on Global Giant, who is owned by a good friend of mine, Sheikh Isa,” said Dettori.

“We had a crack at the Bahrain International, where we came second after missing the gate, then he didn’t take to the dirt well in the Saudi Cup.

“He won really well with Rab Havlin in a Listed race at Kempton last time. This looks a good spot for him and nine furlongs should be ideal. Everyone is happy with him at home.

“He has a favourite’s chance. It is a good ride to have as my first ride back in Britain this year.”

While the 50-year-old will be making his domestic debut for 2021, Dettori feels as strong as ever following a profitable winter abroad.

He added: “I’ve had a great winter despite the Covid pandemic.

“I was able to ride in Dubai and I had a good Carnival out there with Saeed bin Suroor, along with riding a Group One winner for John (Gosden) on Lord North in the Dubai Turf.

“I’ve also had a couple of trips to Bahrain and Saudi Arabia. I’ve really been enjoying things and I’m really looking forward to seeing people back at the races here.

“Fifty (age) is a big number and it does scare me a bit sometimes, but the body feels good at the moment – and I’m enjoying my racing.”

Seven three-year-olds are set to face the starter in the bet365 European Free Handicap.

The betting is headed by Naval Crown, who was last seen beating fellow Charlie Appleby-trained colt Master Of The Seas in Dubai.

“Naval Crown is a very consistent horse, who was impressive on his latest start at Meydan, and he looks the one to beat,” Appleby told www.godolphin.com.

“Stepping back down to seven furlongs is not a concern as he has a lot of natural pace, while he is a fit horse from his two starts out in Dubai.”

Legal Attack makes his reappearance for the training team of Simon and Ed Crisford.

The son of Shalaa was last seen finishing fourth in the Rockingham Stakes at York in October.

Ed Crisford said: “Legal Attack definitely showed he wants quicker ground when he ran at York as Adam (Kirby) said he got stuck in the mud and he is a nice-moving horse.

“We think the step up to seven furlongs should suit as he was crying out for it at the end of last year.

“It looks a tough enough spot to start him off, but he has been doing nicely – hopefully, this can be a nice stepping stone for him for some good summer targets.”

Percy’s Lad won his first two starts for Eve Johnson Houghton, before finishing second in a Group Three at Newbury on his most recent outing late in his juvenile campaign.

“A few of mine appear to be needing the run and we have had some disappointing results, but he deserves to be there and he did nothing wrong last season,” said the Didcot-based trainer.

“It was too soft for him at Newbury, we know he stays a mile and that is probably what he wants.

“I know we are dropping back to seven furlongs, but he is working well and I’m happy as I can be.”