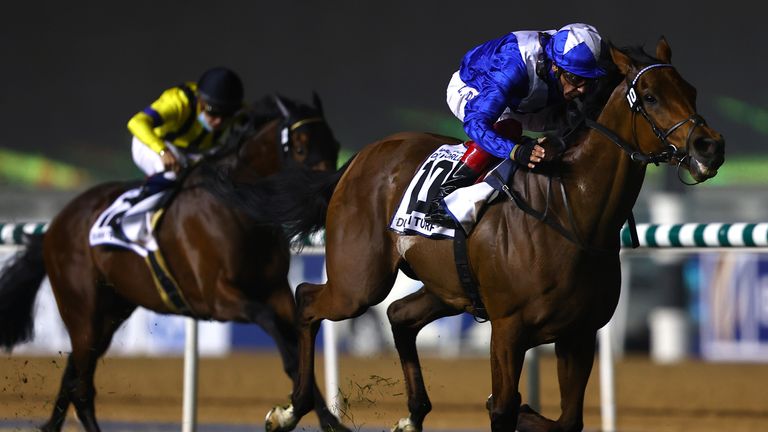 John Gosden’s Lord North produced an irresistible surge down the outside to deliver a famous victory for Frankie Dettori in the Dubai Turf.

Lord North, an impressive winner of the Prince of Wales’s Stakes at Royal Ascot in the summer, struck from well off the pace but was dominant in the final furlong of the Meydan straight.

Dettori, riding ostensibly for the new joint licence holders of Gosden and his son Thady but with the former’s name exclusively on the racecard as trainer in Dubai, was content to sit well behind the lead early on.

Once he asked Lord North to pick up the pacesetters, it was game over – and the 6-4 favourite was three lengths clear at the line, from Japan’s Vin De Garde, with Felix staying on into third for Oisin Murphy and Newmarket trainer Marco Botti.

Dettori said: “It was a nice pace. I followed William’s horse (William Buick, on Al Suhail). I had plenty of horse, and I know he stays really well.

“So I kicked him early, and he flew. I didn’t do much else after that – he did the rest.

“He was a handful in the early days, so he was gelded. He’s much more focused now, and he’s done nothing wrong.

“He’s a horse to go to war with in all the big races this year. Let’s try the Prince of Wales’s again … but I’m sure Mr Gosden will have a plan, and we’ll have lots of fun.”

The Italian added of his successful spell back in Dubai during the winter: “It’s not been so bad, has it?

“I love it – coming back to where I started years ago. Twenty-five years of the World Cup, and I think I’ve been at most of them – they have been tremendous memories.

“Long may it continue.”