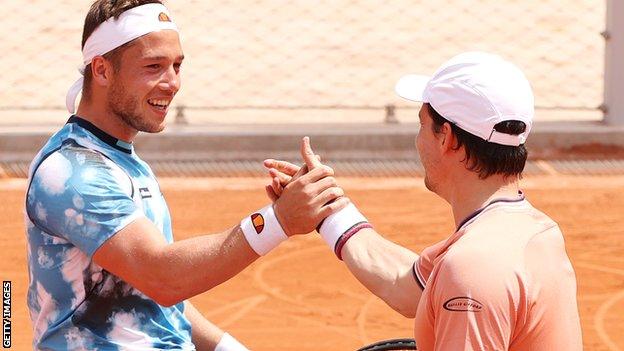 Alfie Hewett and Gordon Reid became the most successful all-British doubles pair with a dominant 6-3 6-0 win over Stephane Houdet and Nicolas Peifer in the French Open wheelchair final.

The top seeds have now won 11 Grand Slams together, including each of the last six.

It was their third consecutive final victory over Houdet and Peifer.

Hewett is also into the men's wheelchair singles final later this week against Japan's Shingo Kunieda.

After losing their first service game, Reid and Hewitt – the leading pair in wheelchair doubles for the last five years – were rarely troubled and cruised to a comprehensive win.

Before this victory, their total of 10 Grand Slams was equal to brothers Reginald and Laurence Doherty who won their titles between 1897 and 1905.

In the women's wheelchair doubles semi-finals, Jordanne Whiley and Yui Kamiji beat Angelica Bernal and Emmanuelle Morch 6-0 6-3 to progress to the final.

Britain's Andy Lapthorne finished third in the men's quad wheelchair singles with a 6-2 7-6 win over David Wagner of the United States.

Lapthorne will later team up with Wagner in the men's quad wheelchair doubles final against Australian Dylan Alcott and Sam Schroder of the Netherlands.