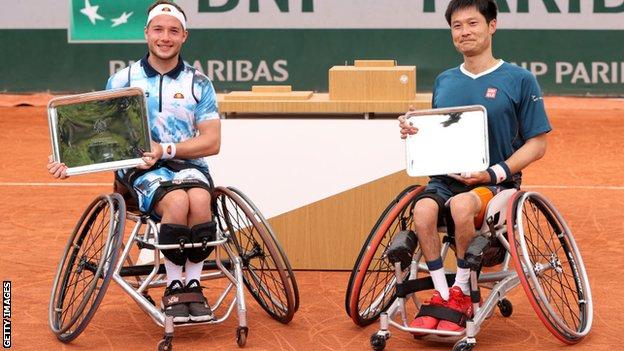 It was his second title at this year's tournament after he and compatriot Gordon Reid successfully defended their doubles crown on Sunday.

But Britain's Jordanne Whiley was beaten in the women's doubles final.

Hewett had said after his comeback win over Gustavo Fernandez in the semi-finals that it had been the best match of his life, and against Kunieda he was determined to build on that.

"After playing that sort of match against Gustavo, it would be a shame to not go into today and try and play better tennis," he said.

"I think the quality dipped in and out of that last one but today the quality was one of the best finals I have played.

"I have played four or five recently and felt very nervous and tense at the beginning. I felt like I came out of the blocks really well, and that was a big thing I was looking at."