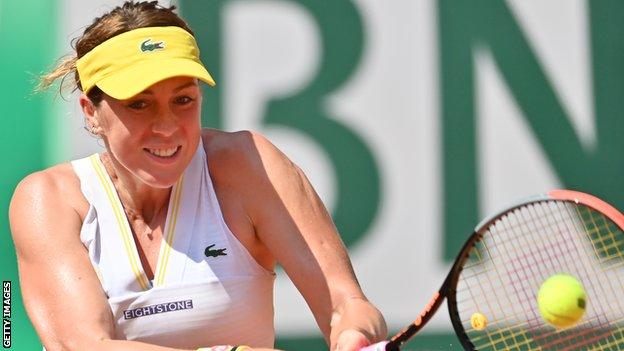 Pavlyuchenkova has won 12 WTA titles in a successful professional career, but had never previously been beyond the quarter-finals at a Grand Slam

Pavlyuchenkova, 29, was a dominant junior player but had never previously reached a Grand Slam semi-final.

Against another debutant at this stage, she won 7-5 6-3 on the Paris clay.

Those two players are also competing in a Grand Slam semi-final for the first time.

It is the first time since 1978 – and only the second time in the Open era – that a Grand Slam women's singles tournament has had four semi-final debutants.

Live coverage as Sakkari takes on Krejcikova in second semi-final

Pavlyuchenkova's greater experience helps her through

While Pavlyuchenkova had not played at this level previously, she did have greater experience and pedigree than her 23-year-old opponent Zidansek.

Pavlyuchenkova had reached six Grand Slam quarter-finals in her career – including at Roland Garros in 2011 – whilst having taken the scalps of Belarusian third seed Aryna Sabalenka and two-time Grand Slam champion Victoria Azarenka in her run to the last four.

In comparison, 85th-ranked Zidansek had never been beyond the second round at a major.

She has also never won a WTA title, nor been ranked inside the world's top 50, making her progress all the more surprising.

The Slovenian, who beat 2019 US Open champion Bianca Andreescu in the first round, possesses a heavy forehand and the ability to play with variety, teeing up an intriguing semi-final which few would have dared to confidently predict.

An entertaining first set was delicately poised at 5-5 after both players had broken serve twice, with Pavlyuchenkova pinching the opener when Zidansek produced a nervy double fault on the Russian's first set point.

Once Pavlyuchenkova broke for a 3-1 lead in the second set, Zidansek looked in danger of crumbling but fought back to break serve for 4-3 when Pavlyuchenkova also double-faulted at a key moment.

However, the Russian composed herself to break again in the following game and served out to clinch her place in Saturday's final.

After Zidansek pummelled a backhand into the tramlines on the first match point, Pavlyunchenkova showed little emotion, seemingly shocked by the scale of her achievement and covered in sweat after a tough battle.

"I don't know what to think because I'm so tired but so happy. It is so emotional," she said in her on-court interview.