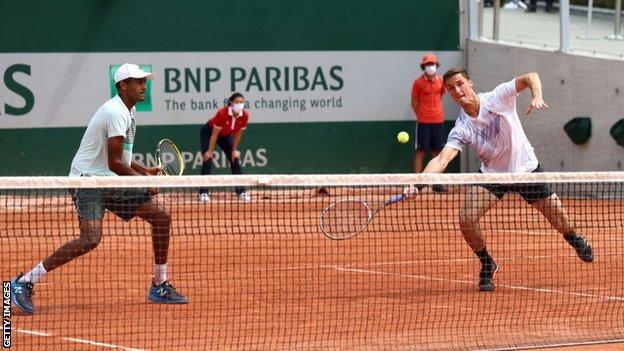 Britain's Jamie Murray reached the French Open doubles third round with Bruno Soares, while Joe Salisbury sealed his place in the second round.

The third seeds face Tim Putz and Hugo Nys in the next round.

Murray and Soares will learn their opponents on Friday and will play either ninth seeds Kevin Krawietz and Horia Tecau or Yen-hsun Lu and Yoshihito Nishioka in the third round.

The pair completed their victory in one hour and 29 minutes, winning the first set with a break of serve before breaking twice in the second to close out the match.

In the men's wheelchair singles, defending champion Alfie Hewett will play Belgium's Joachim Gerard in the opening round in a repeat of last year's final.

Gordon Reid has drawn the world number one Shingo Kunieda, while in the women's event Jordanne Whiley will play her doubles parter Yui Kamiji.

In the quad singles, which starts at the semi-final stage, Andy Lapthorne faces Sam Schroder of the Netherlands.