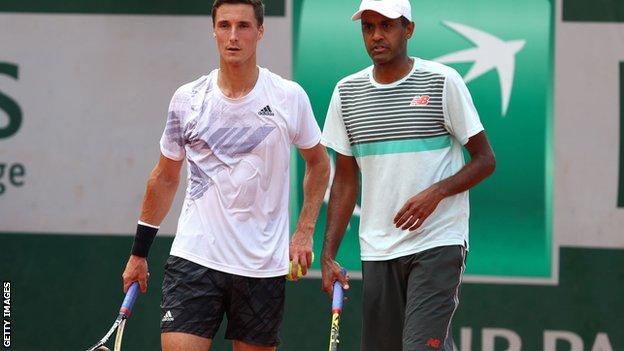 Britain's Joe Salisbury and American Rajeev Ram lost in the second round of the French Open men's doubles to German Tim Puetz and Monaco's Hugo Nys.

Third seeds Salisbury and Ram were broken twice in the first set and in the penultimate game in the second set as they fell to a 6-4 6-4 defeat.

Salisbury, 29, received a code violation for striking a ball out of court as they faced match point.

Salisbury and Ram reached the French Open quarter-finals in 2019 and 2020.

There was better news for Salisbury when he and American Desirae Krawczyk beat Xu Yifan and Bruno Soares 6-4 6-3 in the first round of the mixed doubles.

Salisbury and Krawczyk first partnered each other at the US Open in 2019, and again at the Australian Open for the last two years, reaching the semi-final this year.