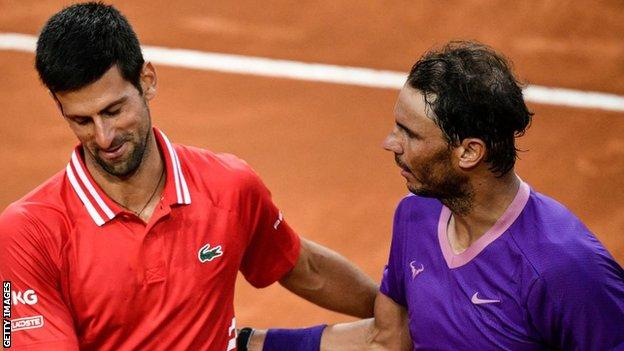 World number one Novak Djokovic and defending champion Rafael Nadal will aim to set up their latest showdown as both contest their French Open quarter-finals on Wednesday.

Victories for Djokovic and Nadal would ensure a 58th meeting between the pair.

But before they can think about that – or the records they are both chasing – they must get past some tricky opponents.

Bidding to make history as the first Open era player to win a second career Grand Slam, the Serb must first overcome another Italian, Berrettini, who was handed a bye into the last eight because of Roger Federer's withdrawal from the tournament.

For Nadal, it is Schwartzman who stands in his way – the Argentine facing the daunting prospect of challenging a player who has won the last 35 sets he has contested at the French Open, a streak dating back to 2019.

Schwartzman, who lost to Nadal in straight sets in the 2020 semi-finals, beat Jan-Lennard Struff 7-6 (11-9) 6-4 7-5 to reach the last eight. He has won just one of 11 meetings with Nadal on all surfaces, though that sole victory arrived on clay in the 2020 Italian Open.

"I think at the beginning of every match against Rafa, you have to walk on the court thinking [about] winning the match," Schwartzman said. "It's always tough. But at the end it's Rafa and you never know what is going to happen. Everyone knows that it's going to be very difficult."

There will be more fans attending Roland Garros on Wednesday with coronavirus restrictions easing in Paris to allow up to 5,000 spectators on Court Philippe Chatrier rather than the 1,000 that have been allowed on it so far. And there will be fans at the night session for the first time. 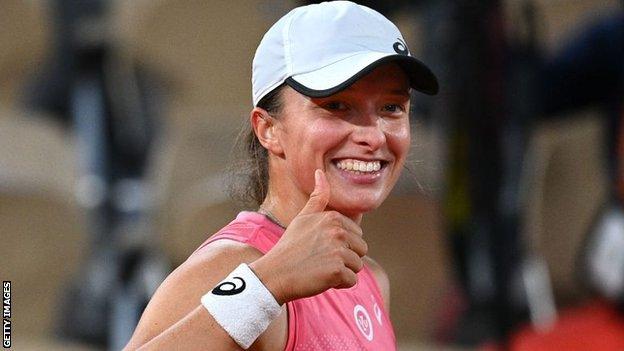 In the women's draw, Polish teenager Iga Swiatek will seek to extend the defence of her title when she meets Greece's Maria Sakkari.

Eighth seed Swiatek is the highest ranked player left in the draw after the 20-year-old beat Ukraine's Marta Kostyuk 6-3 6-4.

She will face Sakkari for the first time, after the 25-year-old 17th seed knocked out last year's runner-up and fourth seed Sofia Kenin 6-1 6-3 to reach the last eight.

Gauff, who won the 2018 junior title at Roland Garros, will contest her first Grand Slam quarter-final after she ousted Tunisia's Ons Jabeur 6-3 6-1 in just 53 minutes.

The 17-year-old is yet to drop a set in Paris and is the youngest woman to reach the last eight of a Slam singles since Nicole Vaidisova in 2006.

The American stormed into the spotlight two years ago when, as a 15-year-old, she beat former champion Venus Williams in the first round at Wimbledon before going on a fairytale run to the fourth round.

She has been touted by former players and pundits as a future Grand Slam champion and reaching the last four here would further strengthen those views.

"You know, my message has always been 'dream big and aim higher'," she said after her fourth-round win over Ons Jabeur.

In the other half of the draw, Russia's Anastasia Pavlyuchenkova and Slovenia's Tamara Zidansek reached maiden Grand Slam semi-finals on Tuesday.