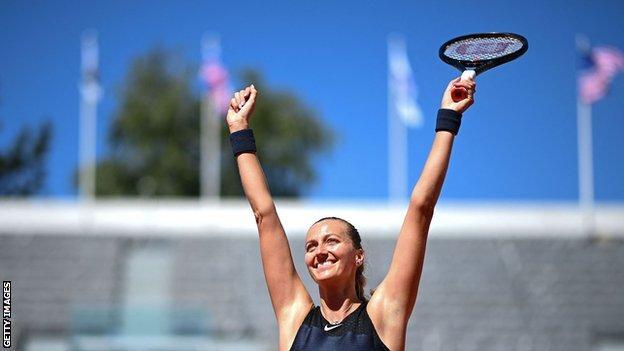 Petra Kvitova saved a match point to reach the French Open second round but Angelique Kerber became the first women's seed to exit the tournament.

Meanwhile, Naomi Osaka also advanced but was warned about her media boycott.

The Japanese second seed beat Romania's Patricia Maria Tig 6-4 7-6 (7-4) before Grand Slam organisers issued a statement telling her she risked expulsion from the event if she continued to refuse to attend news conferences.

Another early exit for Kerber

Germany's Kerber, 33, has now lost in the first round for the third successive time at the clay-court Grand Slam.

World number 139 Kalinina built up a 5-0 lead against her in both sets and despite reeling off four games in a row in the second set, Kerber could not stage a comeback on her least favourite surface.

"I did the best preparation I could do in the last few weeks on clay, but yeah, it's fine, and now I'm looking forward to Wimbledon for the grass-court season," said Kerber, whose major titles have come on hard courts at the US and Australian Opens and the grass of Wimbledon.

"It sounds much better for me, so I'm happy that the next Grand Slam is on grass."

Kvitova & Osaka advance as Collins wins on return after surgery

Last year's semi-finalist Kvitova, 31, was on the brink of defeat against Minnen but she fended off a match point before forcing a tie-break, winning that to level the match.

The two-time Wimbledon champion and 11th seed then ran away with the deciding set.

"I was fighting not only with her but with myself as well," she said.

"I beat myself as well and beat her so that counts."

In the opening match on the main Court Philippe Chatrier, second seed Osaka got off to a winning start against Romania's Tig.

She hit 20 winners in a largely dominant first set but had to work even harder in the second before her quality came through in the tie-break.

Osaka has not yet reached the same heights on the red dirt that she has on hard courts, having never progressed past the third round at Roland Garros and holding a win-loss record of 13-13 in the events leading up to the Grand Slam. 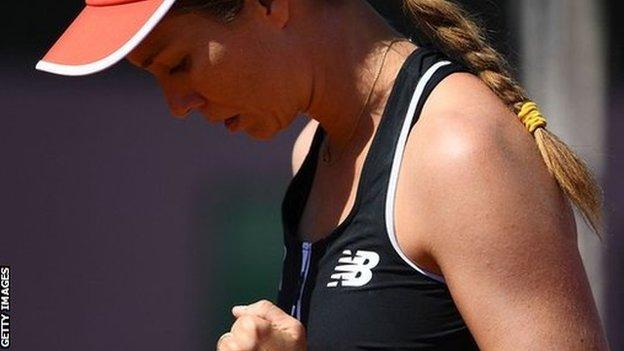 Last year's quarter-finalist Danielle Collins advanced by beating Chinese qualifier Wang Xiyu 6-2 4-6 6-4 in the American's first match since March, when she stepped away from the tour to have endometriosis surgery.

Endometriosis is a condition where tissue that usually covers the inside of the uterus grows outside of it.

"It certainly presented its challenges, but it's been really kind of shocking, like since surgery I've just felt so much better," the 27-year-old said.

Sabalenka, 23, has been on form on the quicker clay of Stuttgart, where she reached the final, and she also won the Madrid title.

Alerts: Get tennis news sent to your phone"I also faced the ugly side of football": Mark Walters looks back at a pioneer of race in the gameDefying gravity with Lily Rice: The first person ever to land a wheelchair backflip
Source