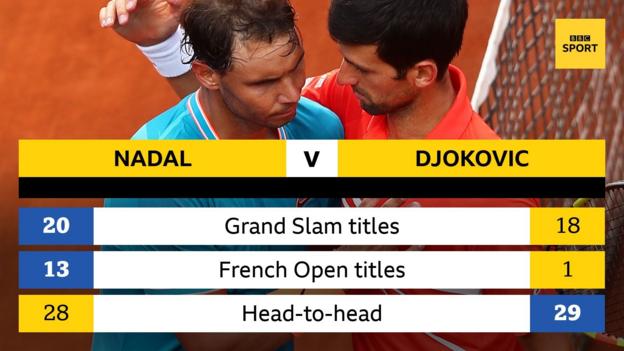 Novak Djokovic and Rafael Nadal have met more than any other two men in the Open era – and the pair are ready to resume their long-standing rivalry once again in the French Open semi-finals.

The pair have faced each other 57 times, with Djokovic leading 29-28 after Nadal won the past two meetings.

The winner will play Stefanos Tsitsipas or Alexander Zverev in Sunday's final.

On facing Nadal at Roland Garros, Djokovic said: "It's not like any other match.

"Let's face it, it's the biggest challenge that you can have playing on clay against Nadal on this court in which he has had so much success in his career.

"In the final stages of a Grand Slam, it doesn't get bigger than that."

What is at stake & why aren't they meeting in the final?

Spain's Nadal and Serbia's Djokovic have won 38 Grand Slam titles between them, with Nadal aiming for a 21st that would move him clear of Roger Federer for the first time in terms of most men's majors.

Nadal is bidding for a record-extending 14th success at Roland Garros, where he has won 105 of his 107 career matches.

Djokovic won his one and only title on the Paris clay in 2016 and is bidding to become the first man in the Open era to win all four Grand Slams twice. 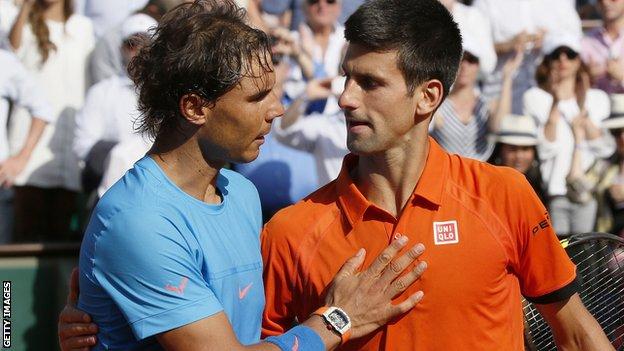 Djokovic is one of only two men to beat Nadal at Roland Garros, having won their 2015 quarter-final in straight sets

The pair were drawn in the same side of the Roland Garros draw this year, with Nadal seeded third in spite of his incredible record there.

That was because the seeding system is based on the world rankings, meaning Russia's Daniil Medvedev was seeded second even though he had never previously won a match at Roland Garros.

"We know each other well. Everybody knows that in these kind of matches anything can happen," Nadal said after his quarter-final win against Argentine 10th seed Diego Schwartzman.

"The player who is playing better that day is the player that is going to have better chances. That's it.

"It is going to be an important match for both of us. But is a semi-final, not a final. That's a big difference.

"Even the winner of that match needs to keep going and there remains a lot of work to do to try to achieve the final goal here."

While Nadal's rivalry with Roger Federer may be considered as the most engaging, it is the Spaniard's battle with Djokovic that is the most enduring.

The pair have produced some of the greatest matches ever seen – which include memorable Grand Slam finals and career-defining victories.

They have met in:

While Djokovic narrowly leads their head-to-head, Nadal goes into the match on the back of two successive victories – in last year's Roland Garros final and, most recently, the Italian Open.

"I'll probably pick Rafa as the biggest rival I've ever had in my career," said the Serb.

"The anticipation for the match against him, any match, any surface, any occasion, is always different from any other."

Will Tsitsipas or Zverev reach their first final at Roland Garros? 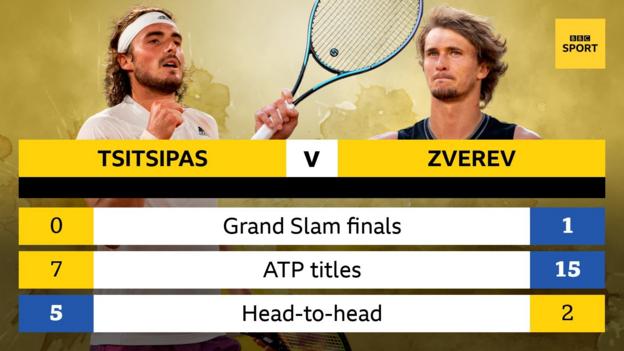 Like the second semi-final, the first between Tsitsipas and Zverev is also a close one to call.

Both men have already won the season-ending ATP Finals in their burgeoning careers, but are yet to land one of the sport's four biggest prizes.

Tsitsipas is yet to play in a Grand Slam final, having reached the semi-finals in each of the past three majors but unable to make the next step.

"I don't think there's a player out there that thinks they can't win the tournament," said Tsitsipas.

Zverev reached the US Open final last year, leading by two sets against Dominic Thiem before the Austrian fought back to win.

Therefore both are bidding to play in their first French Open final, with the German already having achieved a career-best run to the last four.

Both men are very comfortable on the red dirt and each claimed Masters titles – Tsitsipas in Monte Carlo and Zverev in Madrid – during the European clay swing coming into Roland Garros.

Zverev, long touted for major success, says he has started to put less pressure on himself in the biggest tournaments.

"I was not very patient with myself, which I feel like now maybe I have learned how to deal with the situation a little bit better," he said.

"I'm maybe a little bit calmer at the tournaments. But the end goal hasn't changed."