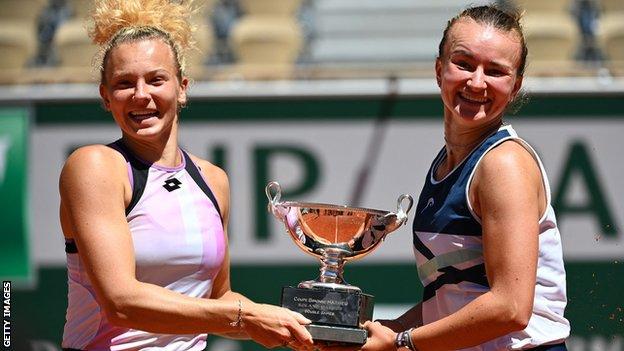 Krejcikova (right) is the only active player to have won a Grand Slams singles, doubles and mixed doubles title in a single season

Krejcikova, 25, won the singles title on Saturday and backed that up with victory alongside fellow Czech Katerina Siniakova in Paris on Sunday.

No player had achieved the double since France's Mary Pierce in 2000.

The second seeds won 6-4 6-2 against Poland's Iga Swiatek and Bethanie Mattek-Sands of the United States.

It is their third major title together and Krejcikova's seventh in total.

As well as victories alongside Siniakova at the French Open and Wimbledon in 2018, she has also won the past three Australian Open mixed doubles.

On Saturday, Krejcikova sealed her rapid rise in the singles game by claiming a first Grand Slam title in an emotional three-set win over Russian 31st seed Anastasia Pavlyuchenkova.

After winning the title in only her fifth major singles tournament, she returned to familiar territory alongside Siniakova less than 24 hours later.

The pair quickly raced into a 5-1 lead and, although Swiatek and Mattek-Sands fought back to 5-4, Krejcikova served out for the set.

Krejcikova and Siniakova had trouble with their serving in the Paris wind, racking up eight double faults, but had enough experience and knowhow to win the final four games for victory.

That meant Krejcikova became only the seventh woman in history to win both the singles and doubles at Roland Garros.

Live scores, results and order of playAlerts: Get tennis news sent to your phoneAre the Paralympics unfair? An investigation in the games classification systemKrept and Konan: Exploring Englishness in creating the Euro 2020 anthem
Source