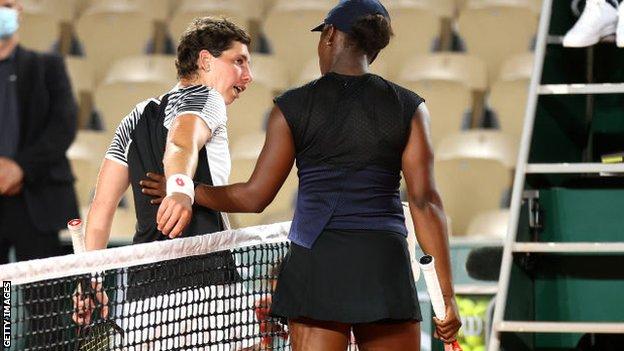 Spain's Carla Suarez Navarro came within two points of a fairytale win on her return at the French Open, just over a month after announcing she had recovered from cancer.

She had her final chemotherapy session in January.

"I'm really proud of myself and really happy to have the chance to play here one last time," two-time French Open quarter-finalist Suarez Navarro said.

"[I had some] tough months. But every time I had on my mind that I want to be here, I want to come back. Roland Garros is one of my favourite tournaments, so I was really clear that my first tournament will be this one."

Before her diagnosis, Suarez Navarro had intended to make 2020 her last season on tour but she now wants to carry on playing and has said it would be a "dream" to compete in this summer's Tokyo Olympics.

Barty overcomes injury scare to advance at French OpenLive scores, results and order of playAlerts: Get tennis news sent to your phone