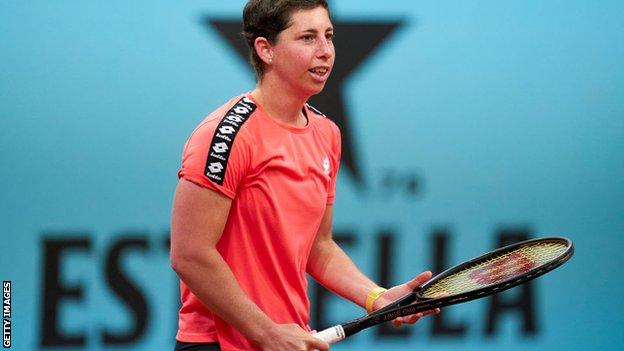 Former world number six Carla Suarez Navarro will play at the French Open, a month after announcing she had recovered from cancer.

The Spaniard, 32, revealed last September she had early stage Hodgkin lymphoma and was having chemotherapy.

She had her final chemo session in January before saying in April that she had been "cured".

"It makes me tremendously excited to be able to participate in Roland Garros," she said.

"I have been working these last few months to give myself the opportunity to compete one last time in Paris," she added in comments posted on the Spanish tennis federation's website.external-link

"I am looking forward to jumping on to the court and feeling again how special this tournament has always been for me."

Before her diagnosis, Suarez Navarro had intended to make 2020 her last season on tour but she now wants to carry on playing and has said it would be a "dream" to compete in this summer's Tokyo Olympics.

The Spaniard, ranked 118 in the world, is a two-time French Open quarter-finalist.

"Tennis has given me many things and I have always wanted to say goodbye on a court," she said.

"Roland Garros has given me some of the best moments of my career. My first great result was produced on these courts, I have very good memories after all these years and it is a joy to be able to come for the last time to compete in Paris."

Sneakernomics: A tale of two siblings, the world's biggest sports brands and a bitter rivalryTech Tech Boom: Hilarious reviews of absurd and sinister inventions from the world of technology
Source