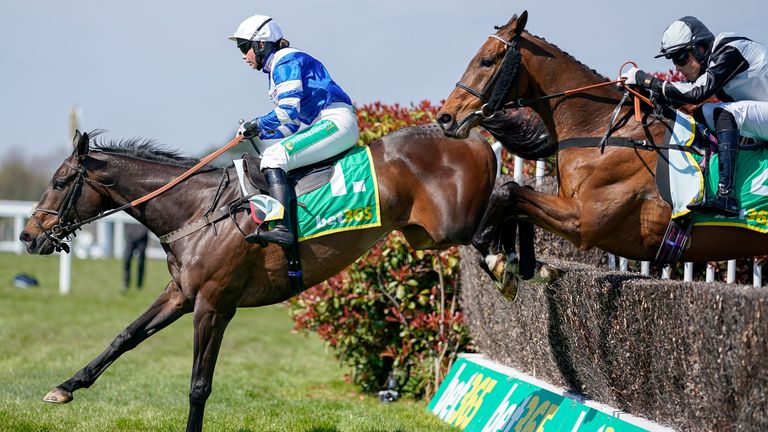 King George hero Frodon showed all his renowned battling qualities to end his season on a winning note in the bet365 Oaksey Chase at Sandown.

Frodon and jockey Bryony Frost provided one of the stories of the season when winning at Kempton on Boxing Day and he was the 4-5 favourite against just three rivals.

Frost had been out of action after a bad fall in the Grand National and only returned on Thursday – with a winner – but it would have taken something out of the ordinary to stop her from partnering her favourite horse.

As usual Frost set out to make all on the bold jumper – who was last seen finishing fifth in the Cheltenham Gold Cup – but approaching the Pond Fence the final time none of the quartet could be ruled out.

When Militarian and Born Survivor cracked after that obstacle, Mister Fisher loomed up looking to be travelling much better under Nico de Boinville.

Nicky Henderson’s charge also got away from the last quicker, too – but if any horse mirrors champion trainer Paul Nicholls’ attitude it is Frodon as he simply would not accept defeat.

With a length to make up Frodon stuck his neck out and began gaining with every stride up the hill, eventually crossing the line a neck to the good.

Nicholls said: “It was a real challenge getting him ready for today because he took a hell of a lot out of himself at Cheltenham and had a hard race in the Gold Cup.

“But he’s tough and he’s class. He jumped well and even though he looked a little bit flat out, he stayed on up the hill to get back on the line.

“He will have a lovely holiday now and we’ll train him for the King George, as there’s no point training him for the Gold Cup because he doesn’t get the trip.

“I will, all being well, give him one run in the autumn before Kempton and then have a look at a race at the Dublin Festival because I think Leopardstown would suit him.”

Frost said: “What he’s done for me is incredible.

“We went a right good gallop the whole way – I wondered if he’d enjoy letting himself on this ground, but Sandown have done a great job in making it safe.

“What a battle – Mister Fisher was all over us, but this lad won’t go down without a fight.

“He’s everything you want, you dream of horses like him.”

Frodon was left unchanged at 16-1 for the King George by Betfair.