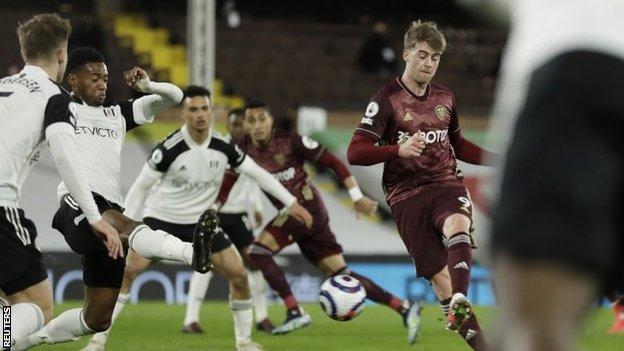 Patrick Bamford has scored 14 Premier League goals this season. Harry Kane is the only English striker to score more

Patrick Bamford hopes he can play himself into England's Euro 2020 squad after scoring one and setting up the other as Leeds beat Fulham.

The game came the day after Bamford was left out of Gareth Southgate's squad for the first World Cup qualifiers.

Fulham, meanwhile, missed the chance to move out of the Premier League relegation zone with a third defeat in four games.

Leeds had two goals disallowed in the first half – first when Luke Ayling's header was ruled out by the video assistant referee and then when Raphinha was well offside before slotting home.

They led when Bamford smashed home at the near post from Jack Harrison's cross.

Fulham were level when defender Joachim Andersen volleyed in from Ademola Lookman's corner, his first goal in English football.

But Leeds scored the winner just before the hour mark, as Bamford fed Raphinha, who beat two defenders before poking home.

"I just need to keep working and see if I can get my name in contention for the Euros," Bamford told Sky Sports. "If I keep going as I am I think I'm in with a shot. If you told me at the start of the season I'd be linked with England, I'd say you were bonkers.

"If it comes, it comes. If not, I'll know I've done my best. It was in the back of my mind a little bit I guess. It gives you a bit of an extra fire in your belly."

The result takes Marcelo Bielsa's Leeds up to 11th in the table on 39 points.

Reaction to Leeds' win at Fulham

Bamford, 27, had only scored one Premier League goal before this season. Two years ago, while in the Championship with Leeds, he looked close to declaring for the Republic of Ireland.

But he has scored 14 top-flight goals this season now – Harry Kane is the only English striker to score more.

Former England defender Matt Upson, watching the game for BBC Radio 5 Live, said he was unlucky not to be in the squad.

He was ultimately the difference between the teams in a high-tempo encounter.

Leeds had failed to score in four of their previous five games, as many as in their first 23 league games this season.

But, after two team-mates had goals ruled out for offside, Bamford gave them the lead as he showed good movement to lose a defender before hammering in Harrison's cross.

Fulham created plenty of chances after equalising but Bamford kept his cool to feed Raphinha for a cleverly finished winner.

In an eventful game, he was booked for a foul, went close to an own goal and avoided a penalty shout for a handball after a ricochet in the box.

There was a bit of a downside to Leeds' night as Bamford, who had been a doubt with a hip injury, hobbled off after 77 minutes.

The Cottagers appeared doomed early in the season but a recent revival gave them the opportunity to move out of the relegation zone for the first time since December.

They had several chances, most notably in the first half, and could only take one of them when Andersen smashed home.

The defeat keeps them two points below Newcastle and three off Brighton. Those two sides play on Saturday and will still have a game in hand on Fulham.

This third defeat in four games means the momentum of their previous five-game unbeaten run may have gone.

"We couldn't cope with their intensity at times. We didn't want it to become a basketball match because that falls into Leeds' hands. We have to move on."

Ivan Cavaleiro had a shot blocked in the opening 15 seconds to set the tone for a high-energy game.

Josh Maja was denied by a sensational Illan Meslier save, with Ayling clearing the loose ball off the line.

The keeper then denied Cavaleiro from getting on to a poor header back and saved a Andre-Frank Zambo Anguissa strike moments later.

Aleksandar Mitrovic replaced Maja at half-time and had to wait until the 89th minute for an effort on target, a header which Meslier saved.

Leeds have won away in London for the first time in 17 games in all competitions, with the previous occasion being a 3-1 win at QPR in December 2017.Fulham have lost 10 league games at Craven Cottage this season, with only Sheffield United (11) losing more home games in the Premier League this season. The last season in which Fulham lost more home league games was 2013-14 (11). This was Leeds' seventh away win in the Premier League this season, the most by a newly promoted side since 2005-06, when Wigan Athletic won eight and West Ham won seven.Leeds have completed a league double over Fulham for the first time since 1984-85 in the second tier, last doing so in the top flight in 1967-68.United have conceded 11 Premier League goals from corners this season, at least three more than any other side.Jack Harrison became the fourth Leeds player to reach five league assists this season after Mateusz Klich, Raphinha and Bamford. Around Europe's top five leagues, only Bayern Munich (six) and Inter Milan (five) have more players with five or more assists.Ademola Lookman has been directly involved in Fulham's past five Premier League goals at Craven Cottage (two goals and three assists).

It is more than two weeks until either side play again in the Premier League because of the international break. Fulham visit Aston Villa (20:00 BST) and Leeds host Sheffield United (15:00) in a Yorkshire derby on Saturday, 3 April.