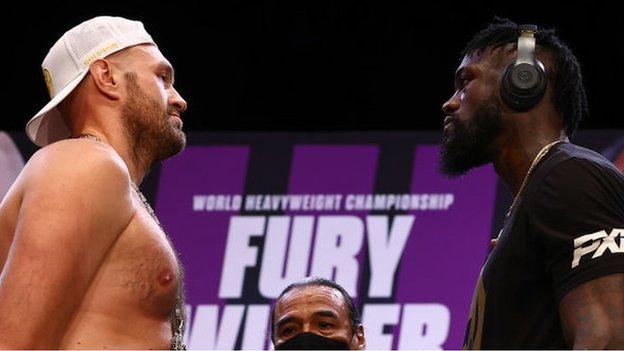 The bout, which had been due to take place in Las Vegas on 24 July, was postponed after the British heavyweight tested positive for coronavirus.

Neither man has fought since Fury's victory in Las Vegas.

"I want nothing more than to smash the 'Big Dosser' on 24 July, but I guess the beating will have to wait," said Manchester-born Fury, 32.

"Make no mistake, I will be back and better than ever. We will fight 9 October and I will knock him spark out."

After a third fight fell through several times because of complications around the Covid-19 pandemic, Fury sought to move on and face fellow Briton Anthony Joshua, who holds the other three significant titles at heavyweight.

But an arbitration hearing ruled Wilder had contractual grounds for a third contest.

"This is what we went to arbitration for. He just wanted what was owed to him. He remains ready to reclaim his world title," said Wilder's manager Shelly Finkel.

Fury is unbeaten in his 31 fights, while Wilder has just one defeat in 44 outings.