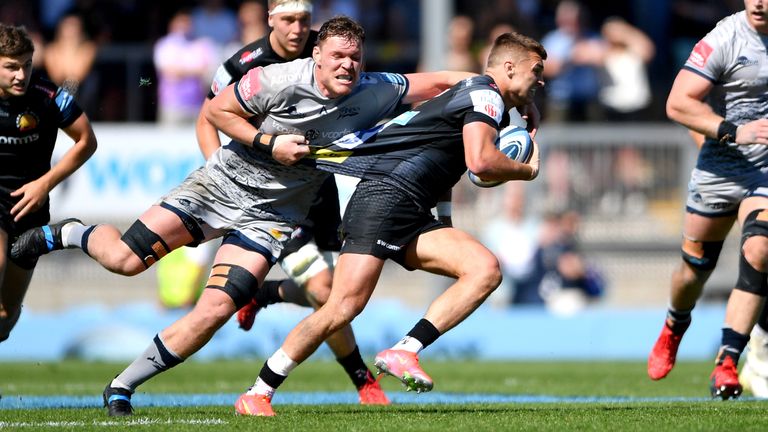 We round up all the action from the final day of the Gallagher Premiership regular season, which saw semi-final seedings and Heineken Champions Cup places up for grabs…

Reigning champions Exeter staged an extraordinary fightback with 14 men to beat Sale and book a home play-off against the same opponents.

For much of a gripping contest in the Devon sunshine, Sale served notice of their title credentials, leading by 16 points when Chiefs lock Sam Skinner was sent off for a high challenge on Faf de Klerk.

But Exeter somehow turned the game on its head after Skinner’s 54th-minute exit, storming to victory through tries by Luke Cowan-Dickie and Stu Townsend, while skipper Joe Simmonds kicked two penalties and two conversions, including a penalty clincher nine minutes from time.

Sale, seeking a first Premiership final appearance for 15 years, will return to Sandy Park next Saturday, yet one more try when they led 19-3 and keeping Exeter at a safe distance would have meant the game going to the north-west instead.

Wing Byron McGuigan, fly-half AJ MacGinty and wing Arron Reed scored tries for Sale, with MacGinty booting two conversions, but ultimately they were undone by Exeter’s astonishing resilience as they were edged out on a day when their England centre Manu Tuilagi made a strong first start for nine months.

But they also suffered a cruel injury blow on the stroke of full-time as influential playmaker MacGinty was carried off in the closing seconds of the match.

A sun-kissed Recreation Ground welcomed nearly 3,000 supporters to witness Bath secure a place in Europe’s elite club competition next season thanks to a victory over Northampton.

They managed it in the most nerve-jangling fashion, hanging on to a one-point lead until replacement flanker Josh Bayliss galloped 70 metres for the clinching try with the clock at zero.

For much of the second half they had been straining for a try bonus point, which would have been enough on most calculations.

In the closing seconds, conceding a converted try and scraping a losing bonus point might have sufficed but it would have been a demeaning end to the season.

Northampton’s scores came from tries through two from Taqele Naiyaravoro, and one apiece from James Grayson and Rory Hutchinson.

Danny Care scored two tries as Harlequins warmed up for the Premiership play-offs with a comfortable victory over Newcastle Falcons.

Quins, who were already certain to finish fourth, ran in eight tries in total at The Stoop on a day where their first-choice players were restored, having been rested against Sale Sharks last time out. 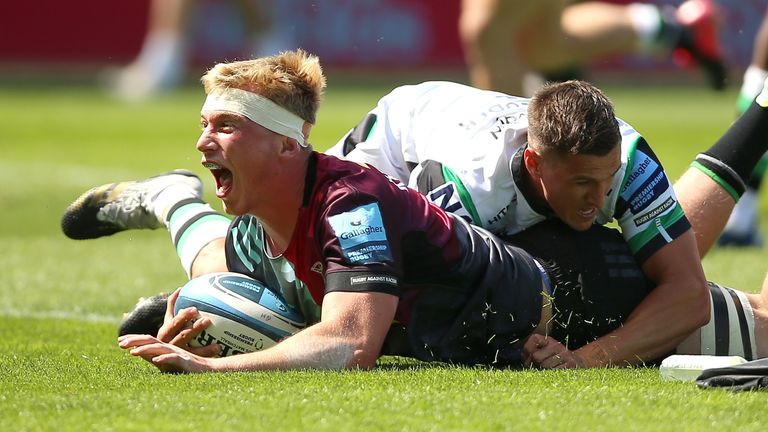 Their refreshed attack had too much for the Falcons, whose faint European Cup qualification hopes were finally snuffed out as a result of the defeat.

Two tries from George McGuigan, plus single scores from Adam Radwan and Jamie Blamire secured a try-scoring bonus-point for Newcastle, but otherwise they were well beaten.

Harlequins now travel to Ashton Gate for the semi-finals against Bristol Bears, who finished top after being awarded four point from their cancelled match against London Irish.

Leicester secured their first top-half Premiership finish for three seasons after edging Wasps at the Ricoh Arena where spectators enjoyed their first live action for 15 months.

Both teams qualified for next season’s Heineken Champions Cup, with Leicester ending the campaign in sixth spot and Wasps in eighth.

Only one point separated them before the match, but the Tigers have taken a stride forward while Wasps, last season’s beaten finalists, have regressed.

Nine of the players involved will report for England duty on Monday but it was someone whose international career appears to be over, Dan Cole, who made a decisive impact in a first half that swung in the summer sunshine.

The Lions prop had scored two tries in 190 Premiership appearances for Leicester but increased his tally by 50 per cent seven minutes before half-time, forcing his way over the line after Harry Wells and Julian Montoya worked a clever line-out move.

Cameron Henderson, Matthew Scott, Julian Montoya and Tomas Lavanini all went over for the Tigers as well, while two tries from Sione Vailanu, and one apiece from Jacob Umaga and Will Rowlands secured a bonus point for Wasps on an afternoon where neither team needed to win to secure a European Cup place.