Manchester City won the first of a potential three trophies this season by beating Tottenham 1-0 in the Carabao Cup final and Manchester United dropped two points in the Premier League as they were held to a goalless draw by Leeds United.

Chelsea beat fellow Champions League contenders West Ham 1-0, Liverpool conceded an injury-time equaliser to draw 1-1 with Newcastle, while Aston Villa also scored late on in a 2-2 draw with West Brom before Leicester fought back to beat Crystal Palace 2-1 on Monday.

Check out my team of the week and then make your own selections towards the bottom of the article. 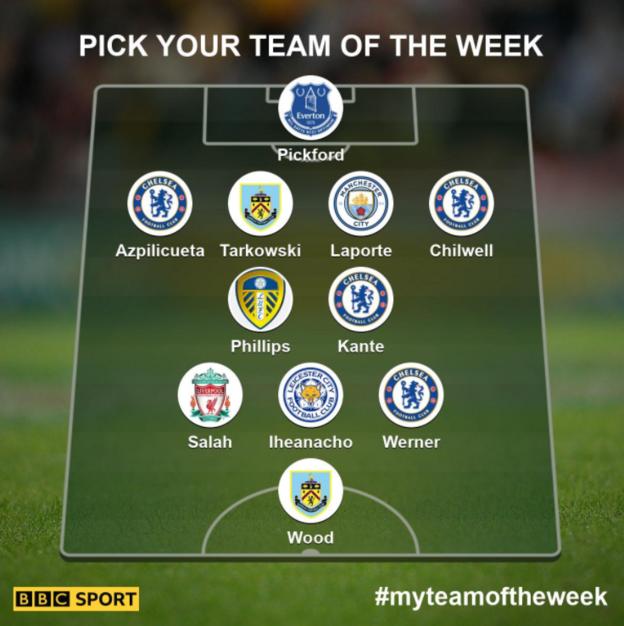 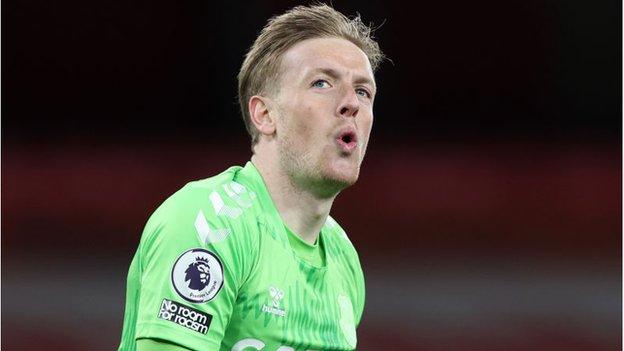 He's not my favourite goalkeeper by any means but credit where credit's due – he saved Everton against Arsenal. Two important saves by Pickford, the first from Dani Ceballos and the second from Gabriel Martinelli keeps Everton in the hunt for a Europa League place. Meanwhile, Pickford's counterpart Bernd Leno had a shocker. It doesn't matter how many saves you make in a match if you can't save the one that matters.

Did you know? Pickford became the first Everton keeper to keep a clean sheet away at Arsenal since Tim Howard in April 2013. 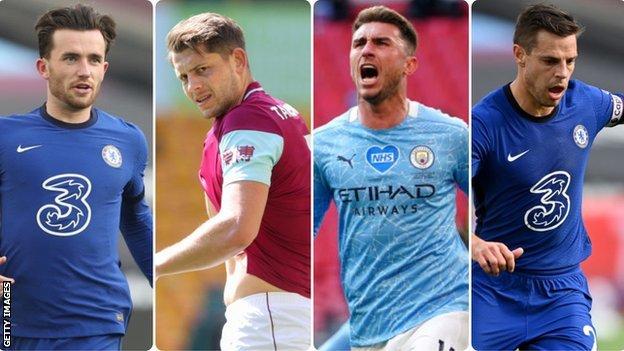 Ben Chilwell: It was his runs down Chelsea's left-hand side that caused West Ham so much trouble, and in fact led to the winner. Chilwell has a cultured left foot and is capable of threading dangerous balls into the penalty area for strikers to attack. The Hammers failed to come to terms with Chilwell's threat and it cost them dearly. As for the incident with Chilwell that led to Fabian Balbuena being sent off, while the action might have been clumsy, do referees not realise football is a contact sport?

Did you know? No Chelsea player created more chances against West Ham than Ben Chilwell (three), with Chilwell providing the assist for Timo Werner's winning goal.

James Tarkowski: This was an outstanding team performance. Burnley have been a credit to the Premier league and to their manager. They may not be the most gifted team I've ever seen but they are the most honest. They don't dive or scream when they get tackled and give 100% win or lose. Ben Mee and Tarkowski were outstanding yet again for Burnley and epitomise what their team is all about.

The way Daniel Podence remained on the ground looking for a penalty having been challenged in the Burnley area was nothing short of a disgrace. I'm not sure the reaction of his team-mates was much better either. If referees don't sort out this incessant diving each time a players is touched in the box we will soon have no game at all.

Did you know? Tarkowski blocked two shots, and won all four of his aerial duels in Burnley's 4-0 win against Wolves.

Aymeric Laporte: I can't begin to tell you what a delight it was to hear the voices of football fans in a stadium again. Spurs might have lost this cup final 1-0 but it could have been much worse – they could have been annihilated. Spurs had a go but Manchester City were in a different class. Laporte scored the winning goal but I'm not entirely sure the France international should have been on the pitch. He got away with one booking and received another. This has proved to be a very difficult week for Spurs and the sooner they can get a permanent manager installed the better. Their rehabilitation must start immediately. Harry Kane's at stake.

Did you know? Laporte had two shots in the Carabao Cup final, with his one on target being the only goal of the game. His two shots and one on target was exactly the same number that Tottenham managed as a team.

Cesar Azpilicueta: This is a new mean Chelsea we are seeing these days who seem to have ironed out their errors at the back without stifling their full-backs and their freedom to attack. Azpilicueta has found his mojo again and is playing with the kind of authority he had when Chelsea lifted the title under Antonio Conte. The Chelsea captain showed great experience when the ball ricocheted off his chest on to his arm but the defender did well to keep his arm by his side so as not to give away a penalty. The Spaniard has been an outstanding servant for Chelsea and the perfect player in my view to take Chelsea through this transitional period under Thomas Tuchel.

Did you know? Chelsea have conceded just 15 goals in the 1,846 minutes Azpilicueta has played for them this season, conceding once on average every 123 minutes. 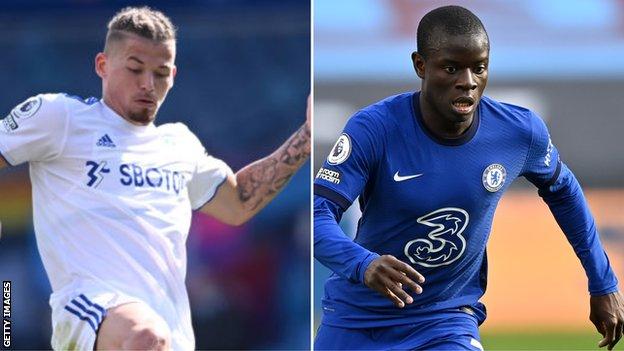 Kalvin Philips: This was another attractive fixture that suffered due to the absence of fans. Lots of good players on show but with no audience to perform to the game petered out. My interest tended to centre on the contest in midfield between Manchester United's Bruno Fernandes and Leeds United's Philips. I've mentioned Philips before in my team of the week and rate him very highly. His performance against Fernandes was impressive. The England midfielder not only relished the battle with the Portuguese star but frustrated the life out of United. Fortunately for Leeds, Manchester United didn't start with Fernandes and Paul Pogba, had they done so Philips might have had his work cut out.

Did you know? Phillips created the most chances (three), made the most tackles (eight) and joint-most recoveries (12) of any Leeds player against Manchester United.

N'Golo Kante: This was a massive win for Chelsea over West Ham and provides daylight between the two teams in the race for a Champions League spot. I've often thought Chelsea have never treated their managers very well, as their record of sackings over the past 10 years will testify. However, their appointments do, by and large, produce results and Tuchel appears to be in that mould. The Chelsea manager has not been in a position to call on Kante as often as he would like because of injury but when he does the French dynamo takes his side to another level. Kante knows how to win trophies and Tuchel football matches. This combination has huge potential if both can stay the course.

Did you know? Kante made the joint-most tackles (four) and most interceptions (three) of any Chelsea player in their 1-0 win at West Ham. 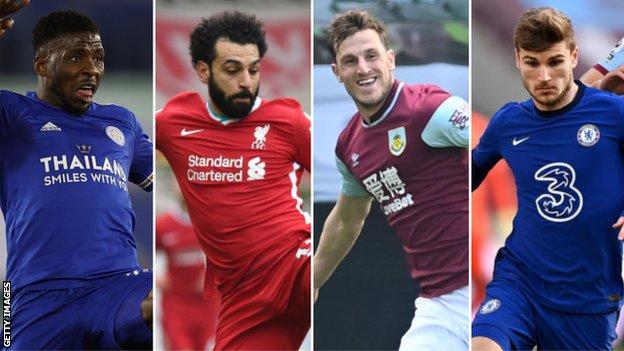 Kelechi Iheanacho: What a goal. He had already set up Timothy Castagne's equaliser before firing in an unstoppable shot past a stranded Vicente Guaita in the Crystal Palace net. Kelechi Iheanacho is in red hot form. Fourteen goals in 14 games for the Nigerian Super Eagle says it all really. This was a massive win for Leicester and cements their challenge for a Champions League spot. I might make Chelsea slight favourites for the FA Cup final but I've just got a funny feeling it might be Leicester and Brendan Rodgers' year. However none of that must deter Tottenham Hotspur from trying to get Rodgers to fulfil their vacant managerial post. He's the only man for the job right now.

Did you know? Kelechi Iheanacho has either scored (12) or assisted (two) in eight of his last nine appearances for Leicester across all competitions.

How has Iheanacho become so prolific?

Mohamed Salah: Twenty league goals in the three of the last four seasons says it all really. Not since Ian Rush has a Liverpool player been so prolific. The turn and finish from Mohamed Salah against a Newcastle side, who looked committed to self-destruction at times, was the best I've seen from the Egypt international in a while. Quite what's happened to Liverpool's ability to finish is a mystery to me. I've never seen so many chances go begging as I did against Newcastle. However, it would have been a terrible injustice if Newcastle had not come away with a point after Callum Wilson's goal was disallowed. The only thing VAR has highlighted since its involvement in the game is the total inability of those who use it.

Did you know? Salah became the first Liverpool player to score 20 goals in as many as three different Premier League seasons.

Chris Wood: This game was all over after 45 minutes – a first half hat-trick from Wood made sure of that. Wolves are sitting pretty on 41 points and played like it. Burnley meanwhile looked like a team on a mission and no-one more so than Wood. The Burnley striker was electric and took his goals brilliantly. It's been a difficult year for the Clarets and Sean Dyche has done a wonderful job to keep his players focused and his team in the Premier League.

Timo Werner: If ever a player deserved a goal then it was Werner. The Chelsea striker ran Manchester City ragged in the FA Cup semi-final and only missed out on my team of the week selection because of his inability to finish what he often started. However, that was not the case against West Ham. The ball from Kante into Werner was wonderfully direct and Werner spun Angelo Ogbonna like he was spinning plates. Mason Mount played it into Chilwell and the ball across the box to Werner to finish was all that was required. It was the German's first goal since mid-February but the chance he missed in the second half is precisely why he hasn't featured more in my previous team selections.

Did you know? Werner has had a hand in 20 goals in all competitions this season, more than any other Chelsea player (11 goals, nine assists).

The Crooks of the Matter

Now the dust has settled and the failed European Super League is fast becoming a distant memory, what have we learned from the events of arguably the most extraordinary week in the history of the professional game?

Firstly, that owners of football clubs, however wealthy, are custodians and the club does not belong to them. Secondly, the 14 Premier League clubs who were not invited to join the breakaway owe a huge debt of gratitude to the fans and I will be extremely interested to see how they and the Premier League intend to repay that debt.

However, I have some humble suggestions.

A freeze on season ticket prices and allow official supporters' groups to buy shares in clubs. They do it with the biggest clubs in Germany and Spain, so why not England? This way the game can be assured that the futures of football clubs are no longer determined by rich soccer barons but genuine fans. If not, it is only a matter of time before history repeats itself.

Fourteen Premier League clubs owe their current status to those who protested so vehemently and the chairmen of the other six are fortunate to still be in their posts. The fans deserve a return on the faith they have placed in their clubs. The Premier League must now do the honourable thing, the right thing, and allow their fans to become shareholders.

The proposed UK government review must make this suggestion its key recommendation and legislate if necessary. After all, this idea is not new and fans across the country have been calling for it for years. If the richest owners in football can't be trusted to act in the best interest of the game, then the government must do it for them.

Pick your team of the week