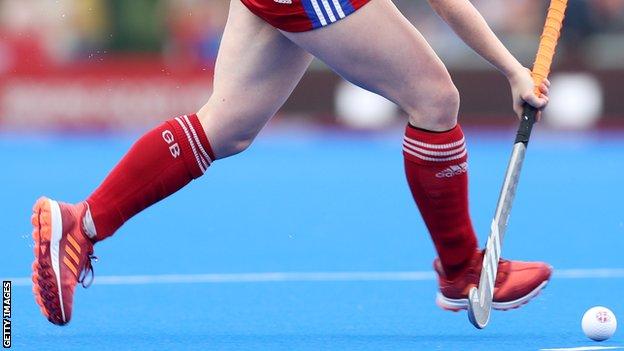 The GB teams return to international action this week

The Great Britain men's and women's hockey teams say they will be supporting the 'Stick It To Racism' campaign in their games this week.

Both sides face the Netherlands and Belgium in the Pro League.

"There is no place for racism in our sport or in society," they said a statement.

"We feel strongly that nobody should be discriminated against because of race, gender, ethnicity, sexuality, disability, age or any other reason."

The squads said they were committing to continuing and furthering their learning, both individually and collectively, and supporting the governing bodies with their inclusion and diversity work.

They added: "Hockey is a sport where everyone should feel like they are valued and belong."

Great Britain Hockey and the England, Wales and Scotland governing bodies are also supporting the initiative.

In August, a number of hockey clubs said there was "endemic racism" within the sport in England and that the national governing body was not doing enough to tackle the problem.

Eight clubs signed a letter accusing England Hockey of presiding over a system that was "biased" against ethnic minority players.

At the time England Hockey responded that it wanted the sport to be a "force for good in diversity".