Geraint Thomas is in line to lead the Ineos Grenadiers at this year’s Tour de France as talks over a new contract with the team continue.

After his ill-fated attempt to win the Giro d’Italia last season, Thomas will return to the Tour in a loaded Ineos squad which is expected to include Giro champion Tao Geoghegan Hart, former Giro winner Richard Carapaz, and experienced veteran Richie Porte.

Thomas turns 35 in May but Grenadiers team principal Sir Dave Brailsford said the 2018 Tour winner is as motivated as ever and in talks to extend his stay with a team he joined at its inception as Team Sky in 2010.

Chris Froome keen to retire on his own termsLizzie Deignan: Quality of women’s cycling keeps me motivatedMark Cavendish re-signs with Deceuninck-QuickStep for 2021

“We’re in discussions (on a contract),” Brailsford said. “For someone like Geraint who has been with us since the start really, with Team Sky all the way through, he’s a very important rider to us, very influential in the group.

“A great role model. And somebody we’d certainly like to – and I hope he does as well, I’m sure he does – end his career with us whenever that may be!

Thomas began his season at the Etoile de Besseges this week, and Brailsford said his motivation had never been higher.

“I think as long as (riders are) hungry and driven and have that innate drive in them still, I don’t think his age now is a limiter to performance,” Brailsford added.

“And he seems hungrier than ever, if I’m honest. It’s funny with these guys, they kind of get to the point where they’re like ‘I can almost see the end here’ and they get like a second wind maybe. But I don’t see any reason to start counting the days down.”

The early part of the season has already seen several races postponed or cancelled as the pandemic continues to cause problems, but Brailsford said he was used to “managing chaos” when it came to sketching out rider programs, which are subject to significant change at the best of times.

The Giro d’Italia is scheduled to begin on May 8 and the Tour on June 26.

Brailsford said Thomas was the obvious choice for a 2021 Tour route that plays to his strengths with 58km of individual time trials and the strong possibility of crosswinds in the opening week.

Egan Bernal, whose Tour title defence was thwarted by a back injury last year, will instead target the Giro d’Italia while new signing Adam Yates – who like Geoghegan Hart hopes to ride the Olympic road race – will look towards the Vuelta a Espana late in the season. 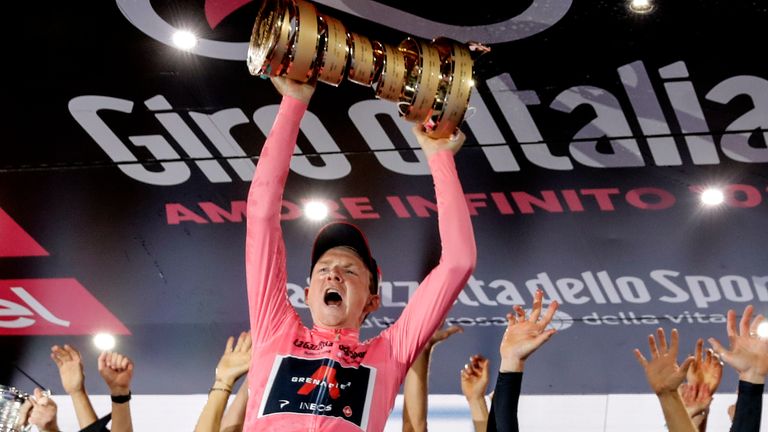 Geoghegan Hart emerged as the surprise winner of the Giro after Thomas crashed out on stage two, but rather than defend his title, Brailsford said the Tour offered a new challenge.

“He had a fantastic adventure, unbelievable experience and an inspiring experience for all of us who were in and around that,” Brailsford said.

“And it feels like he can carry on that adventure, step up while he is in such a great place. Go and take on a new challenge, a different challenge, and see how we can get on.”

Geoghegan Hart’s win in Italy was born of attacking racing in the wake of Thomas’ crash, a world away from the stifling tactics once associated with the ‘Sky train’ of old, but it is something Brailsford wants to continue in 2021.

“I think we found towards the end of last year the guys were racing with an open mind, a freedom, and just enjoying it, the pure joy of racing and it was a totally different experience,” he said.

“We really are serious about maintaining that approach. It’s more of an adventure, more about trying to achieve something. We’ve got a very young group and we really want to build on that idea. Put the fear to one side and not be reckless but really take every opportunity.”