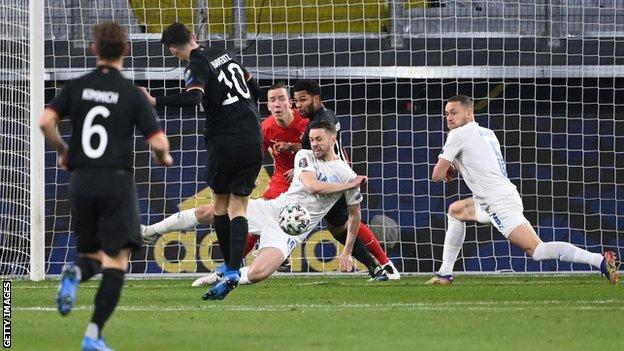 Havertz scored his third Germany goal in the win in Duisburg

Kai Havertz and Ilkay Gundogan scored as Germany got their 2022 World Cup qualifying campaign off to a good start with a comfortable win over Iceland.

The home side led 2-0 after just seven minutes, with Chelsea forward Havertz firing in the second after Leon Goretzka's well-taken opener.

Gundogan continued his fine goalscoring form this season by adding a third.

The Manchester City midfielder has now netted 15 times in his past 24 appearances for club and country.

The closest Iceland came to scoring was a Runar Sigurjonsson shot that deflected just past the far post in the first half.

The home side were vastly superior, though, and should have scored more, with Chelsea defender Antonio Rudiger heading a superb chance wide.

The home side had suffered a scare before kick-off when midfielder Jonas Hofmann tested positive for Covid-19, but the game was allowed to go ahead after consultation with local authorities.

Germany coach Joachim Low, who is stepping down after this year's European Championship, was pleased with his team's start.

"It wasn't our most incredible performance, but it was very important to make a positive start to the new year and that's what we've done tonight," he said.

"We knew they'd sit deep and we knew we were going to have to force them to move in order to create space. I think we did that really well for at least 60 minutes."

Germany visit Romania in their next Group J match on Sunday while Iceland are away to Armenia.